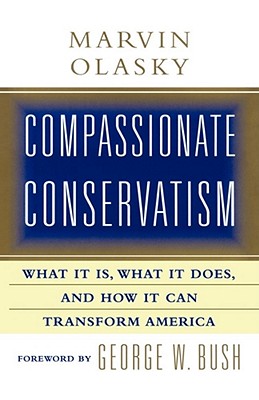 What It Is, What It Does, and How It Can Transform

Compassionate conservatism is a new political force in the land, sweeping the grassroots of people of all faiths, races, and ethnicities. In its parts it offers solutions to many of our most intractable problems; in its whole it is nothing less than an innovative philosophy of government. No author is more qualified to explain its power and promise than Marvin Olasky, described by The New York Times as the godfather of compassionate conservatism. Compassionate conservatism offers a new paradigm for how the government can and should intervene in the economy. It begins with a long-lost premise about human behavior: economics, by itself, is not what changes lives. Only faith, and deeply held beliefs, can do that. For decades government has focused only on material well-being, ignoring the passions and convictions that make life worth living. What is conservative about the new movement is that its leaders also know that government cannot instill these beliefs. What it can do is help them flourish. It can give aid, inspiration, and direction to America's natural armies of compassion that have been a hallmark of our history since the founding. Compassionate conservatism offers a way to transcend the root problems that currently oppress too many deserving Americans. It offers a unique vision of the triangular relationship between the state, our many churches, and our tens of thousands of charities. It is a true reinvention of welfare, a wholesale revolution in the welfare state, and a redefinition of the social safety net. In Compassionate Conservatism Marvin Olasky takes us on a road trip with his son, Daniel, across the country, showing exactly how the new movement is unfolding. Along the way, he offers a set of principles, and a brief tour through history to show that these are not so much radically new ideas as rediscoveries of long-lost wisdom. Read this book for a blueprint of the future of politics and welfare in America.

Marvin Olasky is Professor of Journalism at the University of Texas at Austin and a Senior Fellow at the Acton Institute for the Study of Religion and Liberty. He is the author of more than a dozen books of history and policy analysis, and the editor of World, a weekly news magazine from a Christian perspective. He has been an adviser to George Bush since 1993
Loading...
or support indie stores by buying on