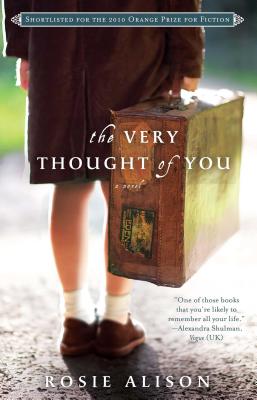 The Very Thought of You

“One of those books you’re likely to remember all your life.” —Alexandra Shulman, Vogue (UK)

For readers of The Orphan Train and The Guernsey Literary and Potato Peel Pie Society comes “not just a story of love but a story of loss, one whose voice will touch even the coldest of hearts.” —BookPage

England, 31st August 1939: The world is on the brink of war. As Hitler prepares to invade Poland, thousands of children are evacuated from London to escape the impending Blitz. Torn from her mother, eight-year-old Anna Sands is relocated with other children to a large Yorkshire estate which has been opened up to evacuees by Thomas and Elizabeth Ashton, an enigmatic, childless couple. Soon Anna gets drawn into their unraveling relationship, seeing things that are not meant for her eyes and finding herself part-witness and part-accomplice to a love affair with unforeseen consequences.

A story of longing, loss, and complicated loyalties, combining a sweeping narrative with subtle psychological observation, The Very Thought of You is not just a love story but a story about love.

Praise For The Very Thought of You: A Novel…

“One of those books you’re likely to remember all your life.” —Alexandra Shulman, Vogue (UK)

“Without question one of the best debuts I’ve read in recent years.” —John Boyne, author of The Boy in the Striped Pajamas

“A rite-of-passage novel... both enriched and haunted by the complicated and dangerous grown-up world of love.” —The Telegraph (UK)

“Moving.... A sincere attempt to depict the reverberations of war—chronicling fractured relationships and the inability to love in the right way.” —The Guardian (UK)

“Irresistibly romantic.... A highly-charged story of love, longing, betrayal and loss... written with such conviction that you can’t help but be swept along by its intensity.” —The Mail on Sunday (Toronto)

“An unmistakably extraordinary story.... There are no predictable twists and turns here, only the realization that sometimes the purest love stories are the most memorable.” —Minneapolis Star-Tribune

“Alison tactfully tackles the notion of loneliness—be it in a foreign setting or a familiar home—along with expertly describing complicated relationships that are fraught with passion.... The Very Thought of You is not just a story of love but a story of loss, one whose voice will touch even the coldest of hearts.” —Bookpage

Rosie Alison grew up in Yorkshire, and read English at Keble College, Oxford. She spent ten years directing television documentaries before becoming a film producer at Heyday Films. She is married with two daughters and lives in London. The Very Thought of You is her first novel.
Loading...
or support indie stores by buying on