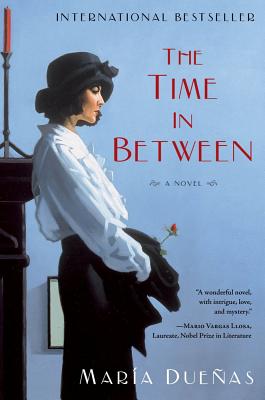 The Time In Between

“It's exciting to find a deftly paced first novel with an engaging heroine, satisfying historical detail, and emotional balance. Love it!” --Esmeralda Santiago New York Times bestselling author of Conquistadora and When I was Puerto Rican

"The Time in Between is an epic novel with an unlikely Spanish heroine, Sira Quiroga, that takes us through one of the most turbulent times in Europe: the onset of World War II. Sira travels on a journey through romance, love, loss, and intrigue, all while discovering traits that she never dreamed she had. I couldn't turn the pages fast enough, and once I reached the end, I couldn't wait to start it all over again!" --Daisy Martinez, author of Daisy: Morning, Noon and Night and Daisy's Holiday Cooking

“Maria Dueñas is a true storyteller. She weaves a spell, conjuring the heat and the glamour, the hardship and the thrill of Morocco and Spain in the late 1930s. The world of Casablanca comes to life as war breaks and Sira Quiroga, a beautiful and betrayed seamstress, is forced to discover her own strength. At a time when everyone must do what they can to survive, some will go beyond. Resistance will be formed and history will be written. Read this book and prepare to be transported.” –Kate Morton, New York Times bestselling author of The Distant Hours

"Engaging, romantic, vivid and captivating. Who knew a story about a seamstress in Spain could be so intriguing and captivating? If you love thick, juicy female-led novels that sweep you away from all sense of time and responsibility, you need to read The Time In Between by María Dueñas." - Kathy Cano-Murillo, author of Waking Up in the Land of Glitter and Miss Scarlet's School of Patternless Sewing

“This thrilling debut is marked by immaculate prose and a driving narrative, establishing Dueñas as a writer to watch.” --starred Publishers Weekly review

"It is no surprise this debut novel was a runaway success in Europe. American fans of historical fiction looking for a dramatic, uncomplicated escape will be similarly entranced." --Library Journal


"From a terrific opening line to the final page, chapters zip by at a pulsing pace." --USA TODAY

"The Time in Between is a magnificent novel that flawlessly brings together history and intrigue. Sira Quiroga – the seamtress – won’t be easily forgotten.” -- Juan Gómez-Jurado, author of The Moses Expedition

"How can a novel be both cruel and tender, dark and luminous all at the same time, and keep the reader glued to its pages with a complex, captivating narrative? María Dueñas's novel manages to make this possible with a tale that is destined to become a literary classic." --Javier Sierra, bestselling author of The Secret Supper and The Lady in Blue

"An enticing debut novel from Spain, The Time In Between is luxuriously landscaped with exotic geographies and international intrigue. María Dueñas delivers a hefty book that's as smooth to read as the tailored lines of the haute couture her unforgettable protagonist creates." -- Fabiola Santiago, author of Reclaiming Paris.

“With its detailed depictions of fashions and the fashionable crowd, exotic settings like Portuguese beaches and crowded bars in Tangiers, and a growing sense of danger and intrigue, The Time In Between is a stunning novel.“ --Fort Worth Star-Telegram