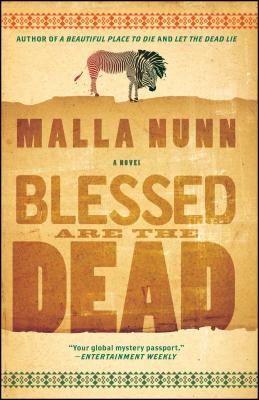 Blessed Are the Dead

Detective Emmanuel Cooper returns to solve a darkly romantic mystery in this rich and complex novel by Malla Nunn, author of Let the Dead Lie and A Beautiful Place to Die.

Detective Sergeant Emmanuel Cooper returns in this powerful, atmospheric novel about two communities forced to confront each other after a murder that exposes their secret ties and forbidden desires in apartheid South Africa, by award-winning author Malla Nunn.

The body of a beautiful seventeen-year-old Zulu girl, Amahle, is found covered in wildflowers on a hillside in the Drakensberg Mountains, halfway between her father’s compound and the enormous white-owned farm where she worked. Detective Sergeant Cooper and Detective Constable Samuel Shabalala are sent to the desolate landscape to investigate. They soon discover that Amahle’s life was woven into both the black and white communities in ways they could never have imagined. Cooper and Shabalala must enter the guarded worlds of a traditional Zulu clan and a divided white farming community to gather up the secrets she left behind and bring her murderer to justice.

In a country deeply divided by apartheid, where the law is bent as often as it is broken, Emmanuel Cooper fights against all odds to deliver justice and bring together two seemingly disparate and irreconcilable worlds despite the danger that is arising.

Praise For Blessed Are the Dead: An Emmanuel Cooper Mystery…

“Historical hindsight may make readers a bit more self-congratulatory about recognizing the evils of apartheid, but it won’t help them see around the curves Nunn has plotted or rise above her insight into the enduring dilemmas of her separate-and-unequal world.”—Kirkus Reviews

“A disturbing book with a morally compelling hero.”—Booklist

“An engrossing and compelling read . . . saturated with the feel of 1950s South Africa.” —Mike Nicol, author of the Revenge trilogy

“The suspense is irresistible, and the mystery sustains itself well. This is a wonderfully effective addition to Nunn’s already masterful series of novels. A highly recommended novel.”— Historical Novel Society

Malla Nunn was born in Swaziland, South Africa, and currently lives in Sydney, Australia. She is a filmmaker with three award-winning films to her credit, as well as the author of the Emmanuel Cooper crime series, When the Ground Is Hard, and Sugar Town Queens.
Loading...
or support indie stores by buying on