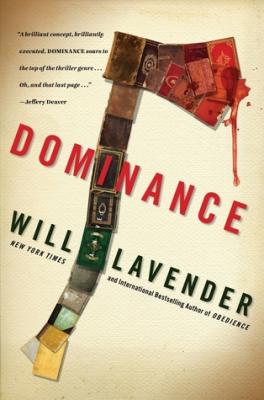 Fifteen years earlier. Jasper College is buzzing with the news that famed literature professor Richard Aldiss will be teaching a special night class called Unraveling a Literary Mystery—from a video feed in his prison cell. In 1982, Aldiss was convicted of the murders of two female grad students; the women were killed with axe blows and their bodies decorated with the novels of notoriously reclusive author Paul Fallows. Even the most obsessive Fallows scholars have never seen him. He is like a ghost. Aldiss entreats the students of his night class to solve the Fallows riddle once and for all. The author’s two published novels, The Coil and The Golden Silence, are considered maps to finding Fallows’s true identity. And the only way in is to master them through a game called the Procedure. You may not know when the game has begun, but when you receive an invitation to play, it is an invitation to join the elite ranks of Fallows scholars. Failure, in these circles, is a fate worse than death. Soon, members of the night class will be invited to play along . . .

Present day. Harvard professor Alex Shipley made her name as a member of Aldiss’s night class. She not only exposed the truth of Paul Fallows’s identity, but in the process uncovered information that acquitted Aldiss of the heinous 1982 crimes. But when one of her fellow night class alums is murdered— the body chopped up with an axe and surrounded by Fallows novels—can she use what she knows about Fallows and the Procedure to stop a killer before each of her former classmates is picked off, one by one?

WILL LAVENDER is the author of two previous novels, Obedience (which was a New York Times and international bestseller and was translated into fourteen languages) and Dominance. He lives in Louisville, Kentucky.

Praise For Dominance: A Novel…

"The self-reflective process of literary criticism known as 'deconstructing the text' becomes a diabolical game of murder in Dominance, an academic mystery by Will Lavender that gleefully illustrates the dangers of losing yourself in a book. . . . Lavender has the devious skills to write a twisted puzzle mystery."—The New York Times Book Review

“Mr. Lavender should be able to write his third, fourth and fifth puzzle-crazy potboilers on the visceral strength of the first two. . . . Dominance is quick and complicated, in a wishfully Da Vinci Code way. But it is also very narrow, à la Agatha Christie . . . Part of Mr. Lavender’s sleight of hand involves flattering the reader’s keen intelligence . . . His book is tightly edited, with a lot of choppy leaps between 1994 and the present, and with a lot of white space (à la James Patterson) to accompany them. And he writes with real enthusiasm . . . Yes, this book’s obsession with riddles and game playing is what one of its characters calls “high nerd,” . . . But it is sincere and not just a feat of cookie cutting.”—Janet Maslin, The New York Times

“Lavender's novel is a literary labyrinth, the kind made popular by Jorge Luis Borges, without ever losing the pace or the pleasure of a taut thriller.”—Milwaukee Journal-Sentinel

"Silence of the Lambs, Agatha Christie, and maybe Pynchon are prerequisites for this thriller set in small-town academia.”—San Antonio Express-News

“Dominance is a twisting, tilting, hall-of-mirrors funhouse of a book . . . [the plot] unfolds like origami with razor-sharp edges . . . [Lavender] plays fair with the evidence, but he treats his readers as intelligent beings, allowing each of us to puzzle out the answer without spoon-feeding the solution or killing the mystery with excessive foreshadowing as many page-turner authors often do. . . . Dominance reveals its secret stealthily, maintaining the mystery and suspense of the present while divulging the secrets of the past. That is a tricky tightrope, and it is marvelously executed.”—Louisville Courier-Journal

“If anyone out there is looking for a good summer book, maybe a beach read, instead of reading something frivolous and light, why not try something that will actually make you think? Will Lavender writes puzzle books: half mystery, half thriller, with a literary twist thrown in for good measure. His newest book, Dominance, will make you think. A lot.”—Fort Worth Fiction

“If you enjoy puzzling twists and turns, and suspense that doesn’t let up even on the last page, you should delve into Dominance.”—Bowling Green Daily News

“Lavender is Houdini-level dexterous at the sleight-of-verb necessary to keep the reader guessing, doubting, perplexed and attentive throughout the book. Characters lie, memories lie, senses lie, and underpinning it all is the game-that’s-not-a-game, this enigmatic Procedure, that pulls like an uncontrollable undertow from beyond the grave. Who is Paul Fallows? Maybe the students in Dominance would have been better off never knowing the answer, but Lavender’s readers will be abundantly rewarded.”—Bookpage

“The Silence of the Lambs meets And Then There Were None . . . a terrific premise.”—Booklist

"Lavender's exciting second literary thriller (after Obedience) pulls readers right into the hunt. Aldiss reminds us of a sexy Hannibal Lecter, and the mystery of the reclusive author Paul Fallows and his connection to the class is riveting. Well-drawn characters, excellent plot, good use of flashbacks, and many red herrings will keep the pages turning to the very end."—Library Journal

"Lavender takes on another puzzle-within-a-thriller . . . Twisty and turny, with all kinds of side roads . . . [He] manages to maintain the novel’s taut, sinister atmosphere from the first page to the last. . . . Readers who loved Lavender’s first book will doubtless delight in this one."—Kirkus Reviews


"A brilliant concept, brilliantly executed. Dominance soars to the top of the thriller genre by infusing its rapid-fire plot with the mysteries of literature and authorship and offering cutting-edge (so to speak) psychological insights into minds both noble and horrifically demented. You'll never look at professors, authors or, well, books the same again. Oh, and that last page . . . "—Jeffery Deaver, #1 international bestselling author of Edge and The Burning Wire

“Will Lavender constructs plots with the expertise of a Parisian baker, masterfully layering mystery on top of mystery until, just when you think the whole thing might topple over, he sets it all together into a dangerously delectable mille-feuille of storytelling. Do save room for seconds.”—Graham Moore, New York Times bestselling author of The Sherlockian

“Dominance is a twisting, intriguing and compelling psychological thriller of the first order. Will Lavender has created a clever maze of a plot, fraught with dark corridors and deadly ends. With this novel in your hands, you'll be voraciously turning the pages late into the night, maybe thinking you're a step ahead, until you realize you've always been a step behind—right up until the stunning final scene.”—Lisa Unger, New York Times bestselling author of Fragile

“Will Lavender has laid out a rich feast for fans of psychological thrillers—at the heart of it all is a weird, addictive game that’s far more dangerous than anyone realizes. This intricately layered story of murders past and present generates plenty of chilling twists and turns, right up to the final sentence.”—John Verdon, bestselling author of Think of a Number and Shut Your Eyes Tight
or
Not Currently Available for Direct Purchase
Copyright © 2020 American Booksellers Association