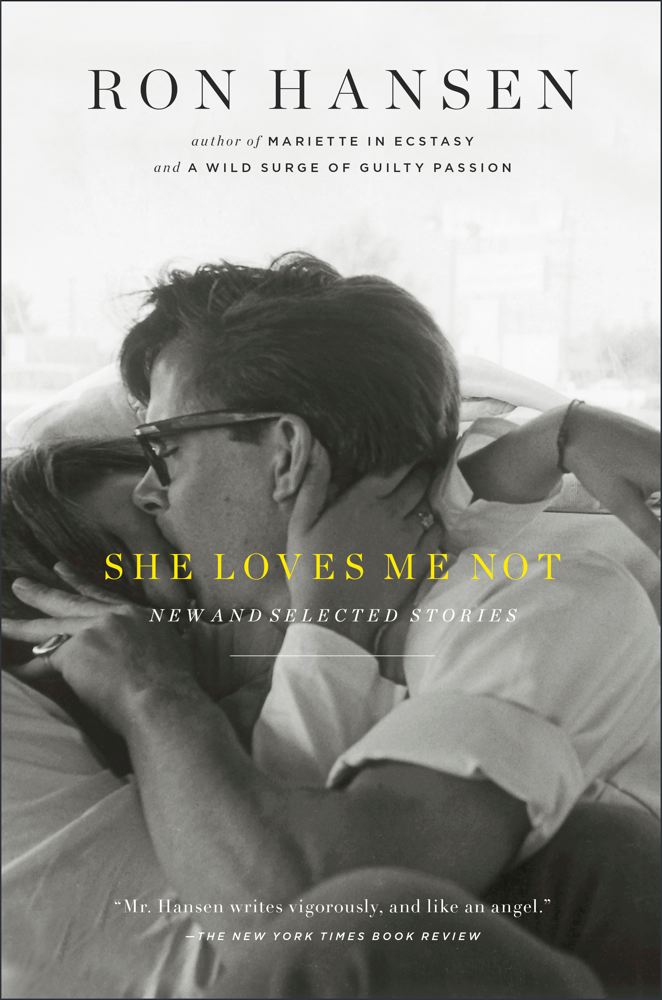 She Loves Me Not

From an author praised by literary giants such as John Irving and the New York Times alike, a stunning story collection—over two decades in the making.

From an author Praised by literary giants and critics alike, a stunning compendium of selected stories over three decades in the making.

Ron Hansen has long been celebrated as a master of both the novel and the short form. His stories have been called “beautifully crafted” (The New York Times), “unforgettable” (San Francisco Chronicle), and “diverse and expansive” (The Washington Post). His 1989 collection, Nebraska, was widely praised, and he has published stories in literary magazines nationwide—The Atlantic, Esquire, Harper’s, Tin House, The Paris Review, and many others.

In this new volume, comprising twelve new stories and seven pieces selected from Nebraska, the subjects of Hansen’s scrutiny range from Oscar Wilde to murder to dementia to romance, and display Hansen at his storytelling best: the craftsman described as “part Hemingway and part García Márquez . . . an all-American magic realist in other words, a fabulist in the native grain.” Readers will thrill to Hansen’s masterful attention to the smallest and most telling details, even as he plunges straight into the deepest recesses of desire, love, fury, and loss. Magisterial in its scope and surprising in its variety, She Loves Me Not shows an author at the height of his powers and confirms Hansen’s place as a major American writer.

Praise For She Loves Me Not: New and Selected Stories…

"Unforgettable stories, each utterly different from the one before. ... This is writing that slows the breathing." — San Francisco Chronicle

"Extraordinary ... the work of an accomplished craftsman and a superb storyteller. The title story is an absolutely stunning portrayal of a physical place on the Earth. Nebraska — the state, the place — takes on the attributes of a living force, a character in itself, and the effect is a powerful, almost supernatural personification of geography and human culture. You watch the small prairie towns as they live and die. . . Ron Hansen's stories are powered by inexorable currents of fate ... [His] talent for sensuous detail travels very well — to the late 1800's, to the 1940's, to the present day ... With him ... we hear the sound of time passing, the rumble of destiny." — New York Times Book Review

"The land breathing, the sound of the wind, the rush of trains across the empty flatness of a Nebraska midnight. In all, it's the book I expected from Ron Hansen — rich in its art, high in its thematic reach, resonating with the complexities of a dense and fully realized fictional world." — Tim O'Brien

"Beautifully crafted stories. ... Wickedness, evil, malice is called by name; and for Hansen's people the snake in the garden never fails to appear." — New York Times

"Just as Raymond Carver was identified with a Pacific Northwest populated by blue-collar workers, and just as Richard Ford has crafted a Montana full of drifters, so Ron Hansen has carved out his own geographical niche. His Nebraska is a distinctive mix of 19th-century settlers and 1980's breadwinners, of sudden storms and life-long yearnings, of lost souls stranded in the middle of nowhere. It should put him on the short-story map." — USA Today

"Nebraska depicts a rowdy, changing American West with wit and brawny lyricism, in voices ranging from hip to tender, the stories gathered here are as diverse and expansive as the country they celebrate....References to America's heartland abound throughout the book and serve as a central metaphor for what's close to American hearts, what connects us: dreams, myths and possibilities as vast as the Great Plains. Wise and smart alecky, creaking with legend and crackling with modernisms, these tales are about American obsession past and present." — Washington Post Book World

Ron Hansen is the author of ten novels—including The Kid, Mariette in Ecstasy, Desperadoes, and A Wild Surge of Guilty Passion—and two short story collections, among them She Loves Me Not. His novel The Assassination of Jesse James by the Coward Robert Ford was a finalist for the PEN/Faulkner Award. He graduated from Creighton University in Omaha and went on to the University of Iowa Writer’s Workshop where he studied with John Irving. He is now Gerard Manley Hopkins, S.J., Professor in Arts and Humanities at Santa Clara University in northern California.
Loading...
or
Not Currently Available for Direct Purchase