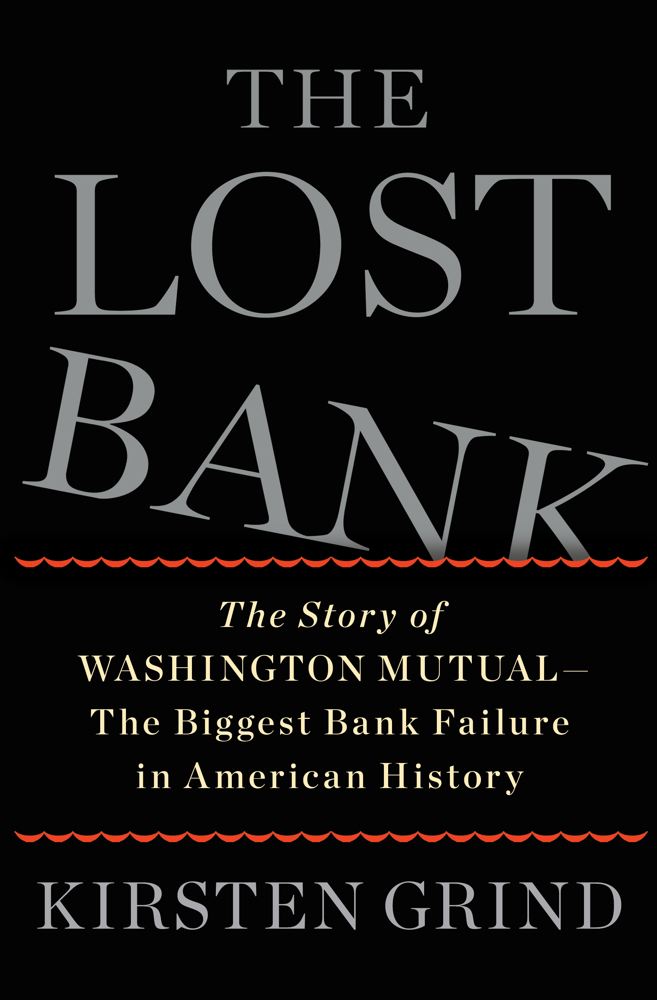 Based on reporting for which the author was named a finalist for the Pulitzer Prize and the Gerald Loeb Award, this book traces the rise and spectacular fall of Washington Mutual.

During the most dizzying days of the financial crisis, Washington Mutual, a bank with hundreds of billions of dollars in its coffers, suffered a crippling bank run. The story of its final, brutal collapse in the autumn of 2008, and its controversial sale to JPMorgan Chase, is an astonishing account of how one bank lost itself to greed and mismanagement, and how the entire financial industry—and even the entire country— lost its way as well.

Kirsten Grind’s The Lost Bank is a magisterial and gripping account of these events, tracing the cultural shifts, the cockamamie financial engineering, and the hubris and avarice that made this incredible story possible. The men and women who become the central players in this tragedy— the regulators and the bankers, the home buyers and the lenders, the number crunchers and the shareholders—are heroes and villains, perpetrators and victims, often switching roles with one another as the drama unfolds.

As a reporter at the time for the Puget Sound Business Journal, Grind covered a story set far from the epicenters of finance and media. It happened largely in places such as the suburban homes of central California and the office buildings of Seattle, but Grind covered the story from the beginning, and the clarity and persistence of her reporting earned her many awards, including being named a finalist for the Pulitzer Prize and the Gerald Loeb Award. She takes readers into boardrooms and bedrooms, revealing the power struggles that pitted regulators at the Office of Thrift Supervision and the FDIC against one another and the predatory negotiations of investment bankers and lawyers who enriched themselves during the bank’s rise and then devoured the decimated bank in its final days.

Written as compellingly as the finest fiction, The Lost Bank makes it clear that the collapse of Washington Mutual was not just the largest bank failure in American history. It is a story of talismanic qualities, reflecting the incredible rise and the precipitous collapse of not only an institution but of trust, fortunes, and the marketplaces for risk across the world.

Praise For The Lost Bank: The Story of Washington Mutual-The Biggest Bank Failure in American History…

“Journalist Kirsten Grind has written a first-rate accounting of the spectacular collapse of Washington Mutual and how behemoth JPMorgan Chase picked over its carcass. Thanks to Grind's winning narrative, what was previously one of the less-well known financial disasters of September 2008 is now fully—and entertainingly—explicated.”—William D. Cohan, author of Money and Power and House of Cards

"An exhaustively researched and well-written account of one of the widely ignored chapters of the great financial crisis. Grind does an excellent job of bringing the complex story to life, and capturing the sense of drama and the impact on peoples' lives. It also casts a spotlight on the role of the FDIC, which has not received as much attention as it should have done. An insightful and well-written book."—Gillian Tett, author of Fool's Gold

"Kirsten Grind’s dogged reporting lays bare a tale of out-of-control salesmen and executive-level gamblers who transformed one of America’s most respected banks into a weapon of mass financial destruction. The Lost Bank is a page-turning read that exposes the Wild West banking tactics that harmed customers, workers and the nation as a whole."—Michael W. Hudson, author of The Monster

“The transformation of Washington Mutual from folksy community lender to reckless 2000-branch behemoth is one of the epic stories of American finance. The bank that banned potted plants to save money in the 1980s became the bank that hired white-suited ‘evangelists’ to praise its go-go mortgages with screams of 'WaMu-lujah.' Grind tells this boom-bust story without lapsing into melodrama or malice, and her tale is all the more powerful for that.” —Sebastian Mallaby, author of More Money Than God

"The Lost Bank is a superbly written, insider account of the collapse of Washington Mutual, among the more surprising downfalls of the financial crisis. It's a story of hubris, ambition and poor judgment that entertains but also is a disturbing coda to the difficult period, providing enduring lessons about how a group of executives who predicted the housing collapse were somehow felled by it."—Gregory Zuckerman, author of The Greatest Trade Ever

"What a marvelous book this is, so well-reported and so well-told by a writer who really threw herself into telling her story. And what an incredible tale that turns out to be, a once-beloved bank felled by greed, hubris, and a shocking disregard of all the obvious warning signs portending the financial disaster that was about to hit all of us. The life-savings of shareholders go up in smoke, a long-standing institution is done in by a new breed of short-sited executives, and meanwhile there was the havoc caused by all those subprime mortgages Washington Mutual, one of the country’s more aggressive and reckless lenders, pushed through the financial system. The Lost Bank would be a joy to read if not for the Greek tragedy that unspools vividly and painfully before your eyes. A first-rate job by a first-rate journalist."—Gary Rivlin, author of Broke, USA

"A detailed, instructive account of a bank failure far away from the power centers of New York City."—Kirkus Reviews

"Lucid, entertaining . . . One of the best accounts... of the Great Crash as it played out on a human scale.”—Publishers Weekly (starred review)

"In The Lost Bank, Grind achieves the best of the business journalist's calling, not only reporting the WaMu disaster in clear, compelling prose for the general reader, but also offering new information and details that may surprise those who think they know the story... [A] sparking achievement."—Jon Talton, The Seattle Times

"Grind... has produced a compelling case study of corporate incompetence and of how regulators are politically captured by the businesses they are meant to oversee."—Steven Pearlstein, The Washington Post

"If indeed this book had been fiction, it would have been branded unrealistic, outlandish, and out of the realm of reality. It is, however, a factual account with endnotes, references, and detailed documentation of sources used. It is an incredible story... The book reads very much like a novel and holds the reader’s interest."—William J. Taylor, ABA Banking Journal

"A fantastic story... Every American should read about it..."—John Hockenberry, "The Takeaway"

"Wall Street Journal reporter Kirsten Grind deftly restores the 'lost bank' to its rightful place in the annals of financial disasters... The clarity and humility of the writing is refreshing."—Tom Braithwaite, The Financial Times

Kirsten Grind has received more than a dozen national awards for her work, including a Pulitzer Prize finalist citation. A reporter for The Wall Street Journal, she lives in New York City.
Loading...
or
Not Currently Available for Direct Purchase