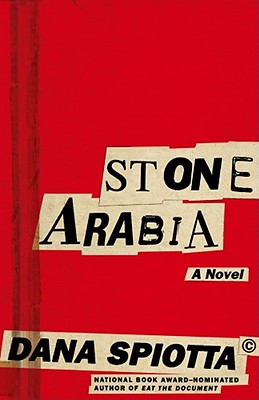 Stone Arabia, Dana Spiotta’s moving and intrepid third novel, is about family, obsession, memory, and the urge to create—in isolation, at the margins of our winner-take-all culture.

In the sibling relationship, “there are no first impressions, no seductions, no getting to know each other,” says Denise Kranis. For her and her brother, Nik, now in their forties, no relationship is more significant. They grew up in Los Angeles in the late seventies and early eighties. Nik was always the artist, always wrote music, always had a band. Now he makes his art in private, obsessively documenting the work, but never testing it in the world. Denise remains Nik’s most passionate and acute audience, sometimes his only audience. She is also her family’s first defense against the world’s fragility. Friends die, their mother’s memory and mind unravel, and the news of global catastrophe and individual tragedy haunts Denise. When her daughter, Ada, decides to make a film about Nik, everyone’s vulnerabilities seem to escalate.

Dana Spiotta has established herself as a “singularly powerful and provocative writer” (The Boston Globe) whose work is fiercely original. Stone Arabia—riveting, unnerving, and strangely beautiful—reexamines what it means to be an artist and redefines the ties that bind.

“The book maps a post-punk milieu where the sense of completeness punk offered... never goes away. Spiotta can capture whole lives in the most ordinary transaction, and make it cut like X’s ‘Los Angeles’ or the Avengers’ ‘Car Crash.’—Greil Marcus, The Believer

“With a DeLillo-like ability to pinpoint the delusions of an era, the National Book Award-nominated Spiotta explores the inner workings of celebrity, family, and other modern-day mythologies.”--Vogue

“Spiotta’s book is a triumph of structure... The skill with which Spiotta builds her characters and their offbeat, nuanced relationship makes it easy to feel like the kind of panting fan Nik could only have written about.”—NPR.org

“Extraordinary…. Diamond-honed prose.... Spiotta delivers one of the most moving and original portraits of a sibling relationship in recent fiction.”—Publishers Weekly, starred review

“Stunning . . . possesses the staccato ferocity of Joan Didion and the historical resonance and razzle-dazzle language of Don DeLillo.”—Michiko Kakutani, The New York Times

“Stone Arabia is propelled by Spiotta’s unflashy eloquence, dry wit and depth of feeling. She’s an exceptional novelist, as sharp on socio-political history as she is on romance and family and especially, the spaces where such things overlap.”—Minneapolis Star Tribune

“Spiotta’s slim, intense novel is an insightful meditation on the damage wrought by a fame-obsessed culture, an unflinching look at family bonds that can turn to shackles and a virtuoso literary performance.”—St. Petersburg Times

“[Dana Spiotta has] captured that hankering for something alluring in the past that never was – a moment of desire and pretense that the best pop music articulates for each generation.”—Houston Chronicle

Dana Spiotta is the author of Innocents and Others; Stone Arabia, A National Books Critics Circle Award finalist; and Eat the Document, a finalist for the National Book Award. Spiotta is a recipient of a Guggenheim Fellowship and the Rome Prize for Literature. She lives in Syracuse, New York.