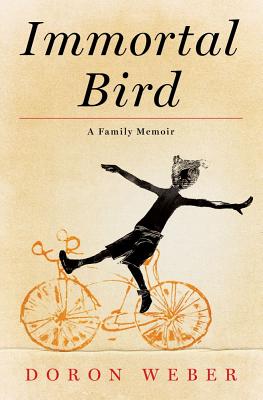 “To open the cover of Immortal Bird is to enter the intimate, admirable, mournfully beautiful life of the Weber family. Damon is the center of the family, a larger-than-life teenager who was born with a potentially fatal heart defect. Damon was also born with an unstoppable personality and the emotional heart of a lion. His father, Doron, tells the family story in an open manner that makes you feel that you are sitting around the family dinner table laughing at their jokes and rooting when Damon yet again rallies. This is a story that makes your own heart stronger for reading it.”
— Janis Segress, Eagle Harbor Book Company, Bainbridge Island, WA
View the List

Immortal Bird is a searing account of a father's struggle to save his remarkable son from a rare heart condidtion that threatens his life. It is a moving story of a young boy's passion for life, a family's love, the perils of modern medicine, and the redemptive power of art in the face of the unthinkable.

Damon Weber is a brilliant kid—a skilled actor and a natural leader at school. Born with a congenital heart defect that required surgery when he was a baby, Damon’s spirit and independence have always been a source of pride to his parents, who vigilantly look for any signs of danger.

Unbowed by frequent medical checkups, Damon proves to be a talent on stage, appears in David Milch’s HBO series Deadwood, and maintains an active social life, whenever he has the energy. But running through Damon’s coming-of-age in the shadow of affliction is another story: Doron’s relentless search for answers about his son’s condition in a race against time.

Immortal Bird is a stirring, gorgeously written memoir of a father's fight to save his son's life.

“Apowerful and lyric portrait of a son and a vibrant family.”—Toni Morrison

“I was seized by Doron Weber’s prose….We’ve gained a book of rare passion.”—Nancy Milford, author of Savage Beauty and Zelda

“I found it almost impossible to read this book, or even to see the pages, at times, through my tears. It was equally impossible to stop reading it—to turn away from its red-haired teen hero or the voice of his adoring father. The boy Damon, whose lifeis delimited by his damaged heart, emerges here as the grandest spirit in a small body since Antoine de Saint-Exupery imagined The Little Price.”—DavaSobel, author of Longitude

“Immortal Bird is the best portrait of a childhood I’ve ever seen, and a moving and unforgettable evocation of the intense love between a father and a son.”—Richard Rhodes, author of The Making of the Atomic Bomb

“In language at once vivid [and] heartfelt…Weber recounts the medical battle that followed [his son’s heart condition] while powerfully conveying his love for his son. This one will disrupt your sleep.”—Library Journal Pre-Pub Alert

“A heartsick father's poignant account of his heartsick son, and a primer on the fragility of life.”—Kirkus Reviews

“[A] detailed, harrowing narrative…a tender, clear-eyed profile of his son…Weber’s heartbreaking story gives us both a tragic cautionary tale and a moving account.”—Publishers Weekly

“Beautifully written…[As] the end approaches, so does a sense of the miraculous: Like the brightest stars, Damon’s energy consumed him, even as it galvanized others. It’s that luminosity, carefully expressed by a devoted father, that makes this memoir so transporting."—MORE Magazine

“Both heartbreaking and life-affirming, this is a tender tale of the love between a father and son.”—Booklist

“A heart-wrenching family memoir that describes the deep love between parent and child, while also celebrating the nobility and spirit of a boy who embraces life with a fiery passion.”—Bookpage

Doron Weber was born in Israel, grew up in New York, and was educated at Brown University and Oxford. He has worked as a newspaper boy, busboy, waiter, and taxi driver and is the coauthor of three published nonfiction books and various articles. For fifteen years he has worked at the Alfred P. Sloan Foundation, a nonprofit that supports science and education.
Loading...
or
Not Currently Available for Direct Purchase