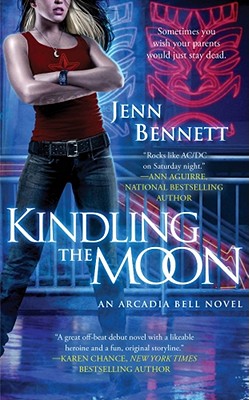 Being the spawn of two infamous occultists (and alleged murderers) isn’t easy, but freewheeling magician Arcadia “Cady” Bell knows how to make the best of a crummy situation. After hiding out for seven years, she’s carved an incognito niche for herself slinging drinks at the demon-friendly Tambuku Tiki Lounge.

But she receives an ultimatum when unexpected surveillance footage of her notorious parents surfaces: either prove their innocence or surrender herself. Unfortunately, the only witness to the crimes was an elusive Æthyric demon, and Cady has no idea how to find it. She teams up with Lon Butler, an enigmatic demonologist with a special talent for sexual spells and an arcane library of priceless stolen grimoires. Their research soon escalates into a storm of conflict involving missing police evidence, the decadent Hellfire Club, a ruthless bounty hunter, and a powerful occult society that operates way outside the law. If Cady can’t clear her family name soon, she’ll be forced to sacrifice her own life . . . and no amount of running will save her this time.

Jenn Bennett is an award-winning visual artist. She is also the author of Kindling the Moon, Summoning the Night, Leashing the Tempest, and Binding the Shadows, the other works in her critically acclaimed series featuring irresistible heroine Arcadia Bell. She lives near Atlanta with her husband and two pugs.
Loading...
or
Not Currently Available for Direct Purchase