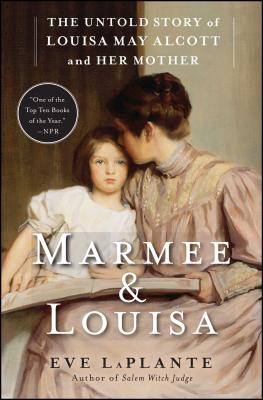 The acclaimed and “meticulously researched” (People) biography that actor Laura Dern—who plays Marmee in the Little Women film adaptation—calls “a beautiful book of letters between Louisa and her mother…a massive influence. You feel it as like a cord of the film.”

Marmee & Louisa, hailed by NPR as one of the best books of 2012, paints an exquisitely moving and utterly convincing portrait of Louisa May Alcott and her mother, the real “Marmee.” Award-winning biographer Eve LaPlante mines the Alcotts’ intimate diaries and other private papers, some recently discovered in a family attic and others thought to have been destroyed, to revive this remarkable daughter and mother. Abigail May Alcott—long dismissed as a quiet, self-effacing background figure—comes to life as a gifted writer and thinker. A politically active feminist firebrand, she fought for universal civil rights, an end to slavery, and women’s suffrage. This gorgeously written story of two extraordinary women is guaranteed to transform our view and deepen our understanding of one of America’s most beloved authors.

“In this meticulously researched look at Louisa May Alcott and her mother, LaPlante shatters myths about the supposed passive Marmee, replacing them with a portrait of a woman who fought for a woman's right to education, professional and maternal satisfaction, and power.”
— People Magazine

“Engrossing... LaPlante, a descendant of the Alcotts, pursued this untold story after discovering forgotten journals and letters in an attic trunk. In her skilled hands these documents yield Abigail unabridged: a thinker, writer, activist, wife and mother who held fast to her convictions in the face of terrible suffering...[T]his is a biography of Louisa, too, and LaPlante makes a compelling case that it was Abigail, not Bronson, who encouraged Louisa not only to channel her considerable energy through writing, but also to pursue publication and to weather the censorship that female writers faced...In bringing to life the woman who made Louisa May Alcott’s work possible, LaPlante shows us that there’s even more to admire in the real Abigail than in the fictional Marmee."
— The Washington Post

“This revealing biography... will forever change how we view the characters and their relationships in Louisa’s novels... Through LaPlante’s book we see how Louisa drew heavily from Abigail's life experiences in her own writings.... Alcott fans who revel in LaPlante’s biography can read to the very last page and then turn to a bonus... companion volume, MY HEART IS BOUNDLESS, writings of Abigail May Alcott.”
— USA Today

“A revelatory dual biography... LaPlante makes a convincing case that Abigail’s doggedly pragmatic responses to the intertwined and ongoing catastrophes of Bronson’s inconsistent emotional involvement and the family finances left an indelible impression on Louisa, who vowed from an early age to take care of her mother... [D]emonstrates that Abigail’s daughters were her dreams made manifest.”
— The Seattle Times

“Until recently, most scholarship has glossed over Abigail’s influence on Louisa’s writing, focusing instead on the role of Louisa’s father, who was often absent. Drawing on newly discovered letters and diary entries, this fascinating dual biography corrects the record by revealing the enormously close bond that was shared by mother and daughter,...showing that Abigail was Louisa’s most important intellectual mentor.”
— BUST (five stars)

“Convincingly argue[d]... Of interest to anyone who enjoys mother/daughter stories, American history, or literary studies… In the winter season, when many of us will cue our DVD players to the opening scene of LITTLE WOMEN, Marmee & Louisa is well worth a read.”
— Bookpage

“[Marmee & Louisa] shows just how much iconic children’s author Louisa May Alcott (1832–1888) “was her mother’s daughter”… previously undiscovered family papers and untapped pages from Abigail’s dairies … provide new evidence exposing her undeniable influence on her daughter … Fresh material gives flesh to the formerly invisible Abigail, revealing how she and her famous daughter mirrored one another … Thoroughly researched and moving.”
— Kirkus

“LaPlante sheds light on Abigail May Alcott… [who] is shown to have been a remarkable intellect and a progressive who played a primary role in Louisa’s life. LaPlante pays meticulous attention to primary sources, delving into the surviving diaries of mother and daughter. This heavily researched double biography serves as a kind of twin to John Matteson’s Eden’s Outcasts. Nineteenth-century New England literature buffs and Alcott aficionados will appreciate this well-wrought study.”
— Library Journal

“This is an important book about an important relationship. Writing engagingly and with precision, Eve LaPlante sheds new light on the Alcott story, a story that is in some ways the story of America.”
— Jon Meacham, Pulitzer Prize winner and New York Times bestselling author of Thomas Jefferson: The Art of Power

“It’s hard to imagine that anything new could be said about the life of Louisa May Alcott, one of America’s most beloved authors. Yet as a great-niece of Abigail May Alcott, Louisa’s mother, Eve LaPlante isn’t just any biographer. Her new book, MARMEE & LOUISA, is…an intimate portrait of mother and daughter, showing how their lives were profoundly intertwined in ways that some biographers have underplayed or ignored altogether... LaPlante chronicles the intense attachment between Abigail and Louisa…. [A] fascinating story of two visionary women…”
— The Boston Globe

“Compelling... LaPlante admirably seeks to paint a fuller picture of Abigail and her role in Louisa's life....[and] allows her protagonists to speak for themselves.”
— Publishers Weekly

Eve LaPlante is a great niece and a first cousin of Abigail and Louisa May Alcott. She is the author of Seized, American Jezebel, and Salem Witch Judge, which won the 2008 Massachusetts Book Award for Nonfiction. She is also the editor of My Heart Is Boundless the first collection of Abigail May Alcott’s private papers. She lives with her family in New England.
Loading...
or support indie stores by buying on
(This book is on backorder)