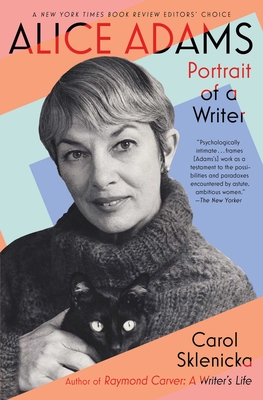 Portrait of a Writer

The first full-scale biography of prolific writer Alice Adams, whose celebrated stories and bestselling novels traced women’s lives and illuminated “an era characterized both by drastic cultural changes and by the persistence of old expectations, conventions, and biases” (The New Yorker).

“Nobody writes better about falling in love than Alice Adams,” a New York Times critic said of the prolific writer. Born in 1926, Alice Adams grew up in Chapel Hill, North Carolina, during the Great Depression and came of age during World War II. After college at Radcliffe and a year in Paris, she moved to San Francisco. Always a rebel in good-girl’s clothing, Adams used her education, sexual and emotional curiosity, and uncompromising artistic ambition to break the strictures that bound women in midcentury America. Divorced with a child to raise, she worked at secretarial jobs for two decades before she could earn a living as a writer. One of only four winners of the O. Henry Special Award for Continuing Achievement, Adams wove her life into her fiction and used her writing to understand the changing tides of the 20th century. Her work portrays vibrant characters both young and old who live on the edge of their emotions, absorbed by love affairs yet always determined to be independent and to fulfill their personal destinies.

Carol Sklenicka interweaves Adams’s deeply felt, elegantly fierce life with a cascade of events—the civil rights and women’s rights movements, the sixties counterculture, and sexual freedom. Her biography’s revealing analyses of Adams’s stories and novels from Careless Love to Superior Women to The Last Lovely City, and her extensive interviews with Adams’s family and friends, among them Mary Gaitskill, Diane Johnson, Anne Lamott, and Alison Lurie, give us the definitive story of a writer often dubbed “America’s Colette.” Alice Adams: Portrait of a Writer captures not just a beloved woman’s life in full, but a crucial span of American history.

Praise For Alice Adams: Portrait of a Writer…

“After a long apprenticeship, hampered by supporting her husband’s own writing career before their 1958 divorce, Adams found an audience in the 1970s that was newly avid for her core concern: female-centric depictions of love and sex…Sklenicka’s well-researched biography…easily evokes the spirit of Adams’s life, times, and works.” —Publishers Weekly

“Those who love the novels and short stories, which trace women's lives beginning in 1930s America as they celebrate, grieve, and grow with the century, will be startled and delighted to see where the life and the fiction converge. [This] biography often reads like an Adams novel blessedly slowed down to allow the reader to soak for a moment in the atmospheres of a Chapel Hill childhood, Radcliffe College, Paris, and 1960s San Francisco.” —Booklist

“Alice Adams is a perceptive, elegantly written biography that will broaden her renown and readership.” —San Francisco Chronicle

“Carol Sklenicka is a lucid, scrupulous writer… [who] is prudent and appreciative in her assessment of Adams’s work.”—Blake Bailey, The New York Times Book Review


“Sklenicka is clearly a skilled biographer. Her writing is engaging yet simple and lacks the pretense and gentility Adams seemingly would have hated. No detail, story, or analysis feels unnecessary, an accomplishment for a work totaling more than 500 pages.” —Chicago Review of Books

Carol Sklenicka is the author of Raymond Carver: A Writer’s Life, which was named of one of the 10 Best Books of 2009 by The New York Times Book Review, and Alice Adams: Portrait of a Writer. She lives with poet and novelist R.M. Ryan in northern California.
Loading...
or
Not Currently Available for Direct Purchase