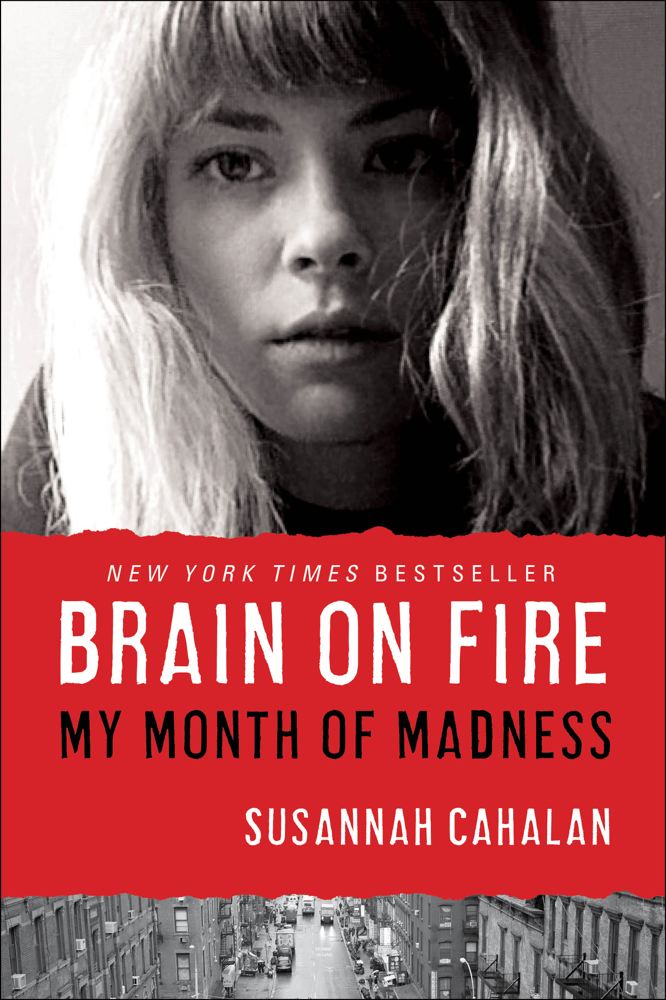 My Month of Madness

“A young reporter's near-death experience started with what seemed to be a bedbug bite, followed by an out-of-character migraine. Cahalan forgot a pitch meeting. She snooped on her boyfriend's email. Beloved newspaper clippings were tossed. Garbage piled up in her apartment. And then the seizures began. This compelling story of one woman's descent into madness and the equally horrifying journey of her family to find suitable help works both as a great literary memoir as well as a well-reported medical mystery. You might say the result is Girl, Interrupted with a dash of The Hot Zone and a sprinkling of The Exorcist!”
— Daniel Goldin, Boswell Book Company, Milwaukee, WI
View the List

A gripping memoir and medical suspense story about a young New York Post reporter’s struggle with a rare and terrifying disease, opening a new window into the fascinating world of brain science.

One day in 2009, twenty-four-year-old Susannah Cahalan woke up alone in a strange hospital room, strapped to her bed, under guard, and unable to move or speak. A wristband marked her as a “flight risk,” and her medical records—chronicling a month-long hospital stay of which she had no memory at all—showed hallucinations, violence, and dangerous instability. Only weeks earlier, Susannah had been on the threshold of a new, adult life: a healthy, ambitious college grad a few months into her first serious relationship and a promising career as a cub reporter at a major New York newspaper. Who was the stranger who had taken over her body? What was happening to her mind?

In this swift and breathtaking narrative, Susannah tells the astonishing true story of her inexplicable descent into madness and the brilliant, lifesaving diagnosis that nearly didn’t happen. A team of doctors would spend a month—and more than a million dollars—trying desperately to pin down a medical explanation for what had gone wrong. Meanwhile, as the days passed and her family, boyfriend, and friends helplessly stood watch by her bed, she began to move inexorably through psychosis into catatonia and, ultimately, toward death. Yet even as this period nearly tore her family apart, it offered an extraordinary testament to their faith in Susannah and their refusal to let her go.

Then, at the last minute, celebrated neurologist Souhel Najjar joined her team and, with the help of a lucky, ingenious test, saved her life. He recognized the symptoms of a newly discovered autoimmune disorder in which the body attacks the brain, a disease now thought to be tied to both schizophrenia and autism, and perhaps the root of “demonic possessions” throughout history.

Far more than simply a riveting read and a crackling medical mystery, Brain on Fire is the powerful account of one woman’s struggle to recapture her identity and to rediscover herself among the fragments left behind. Using all her considerable journalistic skills, and building from hospital records and surveillance video, interviews with family and friends, and excerpts from the deeply moving journal her father kept during her illness, Susannah pieces together the story of her “lost month” to write an unforgettable memoir about memory and identity, faith and love. It is an important, profoundly compelling tale of survival and perseverance that is destined to become a classic.

Praise For Brain on Fire: My Month of Madness…

“Harrowing . . . Cahalan's tale is . . . admirably well-researched and described. . . . This story has a happy ending, but take heed: It is a powerfully scary book.”

“A dramatic and suspenseful book that draws you into her story and holds you there until the last page. . . I recommend it highly.”

“The bizarre and confounding illness that beset the 24-year-old New York Post reporter in early 2009 so ravaged her mentally and physically that she became unrecognizable to coworkers, family, friends, and—most devastatingly—herself… She dedicates this miracle of a book to ‘those without a diagnosis’… [An] unforgettable memoir.”

“This fascinating memoir by a young New York Post reporter…describes how she crossed the line between sanity and insanity…Cahalan expertly weaves together her own story and relevant scientific information…compelling.”

“For the neurologist, I highly recommend this book on several grounds…First, it is a well-told story, worth reading for the suspense and the dramatic cadence of events…Second, it is a superb case study of a rare neurologic diagnosis; even experienced neurologists will find much to learn in it…Third, and most important, it gives the neurologist insight into how a patient and her family experienced a complex illness, including the terrifying symptoms, the difficult pace of medical diagnosis, and the slow recovery. This story clearly contains lessons for all of us.”


“Focusing her journalistic toolbox on her story, Cahalan untangles the medical mystery surrounding her condition…A fast-paced and well-researched trek through a medical mystery to a hard-won recovery.”


It's a cold March night in New York, and journalist Susannah Cahalan is watching PBS with her boyfriend, trying to relax after a difficult day at work. He falls asleep, and wakes up moments later to find her having a seizure straight out of The Exorcist. "My arms suddenly whipped straight out in front of me, like a mummy, as my eyes rolled back and my body stiffened," Cahalan writes. "I inhaled repeatedly, with no exhale. Blood and foam began to spurt out of my mouth through clenched teeth."
It's hard to imagine a scenario more nightmarish, but for Cahalan the worst was yet to come. In 2009, the New York Post reporter, then 24, was hospitalized after — there's really no other way to put it — losing her mind. In addition to the violent seizures, she was wracked by terrifying hallucinations, intense mood swings, insomnia and fierce paranoia. Cahalan spent a month in the hospital, barely recognizable to her friends and family, before doctors diagnosed her with a rare autoimmune disorder. "Her brain is on fire," one doctor tells her family. "Her brain is under attack by her own body."

Cahalan, who has since recovered, remembers almost nothing about her monthlong hospitalization — it's a merciful kind of amnesia that most people, faced with the same illness, would embrace. But the best reporters never stop asking questions, and Cahalan is no exception. In Brain on Fire, the journalist reconstructs — through hospital security videotapes and interviews with her friends, family and the doctors who finally managed to save her life — her hellish experience as a victim of anti-NMDA receptor encephalitis. The result is a kind of anti-memoir, an out-of-body personal account of a young woman's fight to survive one of the cruelest diseases imaginable. And on every level, it's remarkable.

The best journalists prize distance and objectivity, so it's not surprising that the most difficult subject for a news writer is probably herself. And although she's young, Cahalan belongs firmly to the old school of reporters — she writes with an incredible sense of toughness and a dogged refusal to stop digging into her past, even when it profoundly hurts. One of the most moving moments in Brain on Fire comes when Cahalan, preparing a New York Post article about her illness, watches videos of herself in the hospital. She's horrified, but finds that she can't look away. "I was outrageously skinny. Crazed. Angry," she writes. "I had the intense urge to grab the videos and burn them or at least hide them away, safe from view."

But she doesn't, and she barely flinches when her loved ones tell her about the paranoid delusions that held her firmly in their grasp for several weeks. There's no vanity in Brain on Fire — Cahalan recounts obsessively searching her boyfriend's email for signs that he was cheating on her (he wasn't) and loudly insisting to hospital workers that her father had killed his wife (she was alive). Cahalan is nothing if not tenacious, and she perfectly tempers her brutal honesty with compassion and something like vulnerability.

It's indisputable that Cahalan is a gifted reporter, and Brain on Fire is a stunningly brave book. But even more than that, she's a naturally talented prose stylist — whip-smart but always unpretentious — and it's nearly impossible to stop reading her, even in the book's most painful passages. Reflecting on finding a piece of jewelry she'd lost during her illness, she writes, "Sometimes, just when we need them, life wraps metaphors up in little bows for us. When you think all is lost, the things you need the most return unexpectedly."

Brain on Fire comes from a place of intense pain and unthinkable isolation, but finds redemption in Cahalan's unflagging, defiant toughness. It's an unexpected gift of a book from one of America's most courageous young journalists.

Susannah Cahalan is a news reporter at the New York Post whose award-winning work has also been featured in The New York Times. She lives in Jersey City, New Jersey.