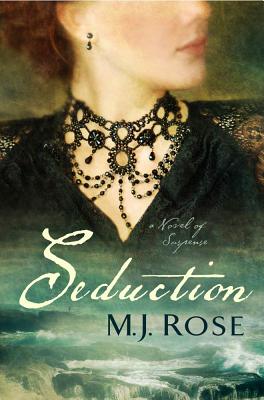 “'Seduction: A Novel of Suspense (Atria, $24.00), by the ever-resourceful M.J. Rose, transcends time, recounting the story of Victor Hugo's tragic loss of his daughter and his desperate attempts to contact her via seances. Fast forward to the present, when Jacinthe ' Jac' L'Etoile, a mythologist specializing in Celtic lore, probes the secrets of the Isle of Jersey, where Hugo communed with spirits and composed his journal. With alacrity, Rose interweaves mythology, the supernatural, psychoanalysis and Evil Incarnate, creating an amazing amalgam of narrative wonder. And, yes, M.J. Rose fans, there are reincarnationists in Seduction, and they will haunt you.'”
— Lynne Maxwell, Mystery Lovers Bookshop, Pittsburgh, PA
View the List

From the author of The Book of Lost Fragrances comes a haunting novel about a grieving woman who discovers the lost journal of novelist Victor Hugo, awakening a mystery that spans centuries.

A gothic tale about Victor Hugo’s long-buried secrets and the power of a love that never dies . . . In 1843, novelist Victor Hugo’s beloved nineteen-year-old daughter drowned. Ten years later, still grieving, Hugo initiated hundreds of séances from his home on the Isle of Jersey in order to reestablish contact with her. In the process, he claimed to have communed with Plato, Galileo, Shakespeare, Dante, Jesus—and even the devil himself. Hugo’s transcriptions of these conversations have all been published.

Recovering from a great loss, mythologist Jac L’Etoile thinks that throwing herself into work will distract her from her grief. In the hopes of uncovering a secret about the island’s mysterious Celtic roots, she arrives on Jersey and is greeted by ghostly Neolithic monuments, medieval castles and hidden caves. But the man who has invited her there, a troubled soul named Theo Gaspard, hopes she’ll help him discover something quite different— transcripts of Hugo’s lost conversations with someone he called the Shadow of the Sepulcher. Central to his heritage, these are the papers his grandfather died trying to find. Neither Jac nor Theo anticipate that the mystery surrounding Victor Hugo will threaten their sanity and put their very lives at stake.

Seduction is a historically evocative and atmospheric tale of suspense with a spellbinding ghost story at its heart, written by one of America’s most gifted and imaginative novelists. Awakening a mystery that spans centuries, this multilayered gothic tale brings a time, a place and a cast of desperate characters brilliantly to life.

Praise For Seduction: A Novel of Suspense…

“M. J. Rose's Seduction has just about everything a thriller fan could wish for.”
— Philadelphia Inquirer

"Readers will be enchanted by M.J. Rose's supernaturally charged novel Seduction, inspired by Victor Hugo's self-imposed exile on the British island of Jersey in the 1850s.  Great elements of suspense are present -- a remote, misty island teeming with century-old Celtic ruins, an unreliable narrator who may or may not be going crazy."
— USA Today

"Well-crafted paranormal novel of suspense. Rose is especially good at recreating Hugo's despair...making his abandonment of rationality all too plausible."
— Publishers Weekly

“Rose’s growing fan base will probably devour this one.”
— Booklist

"The sensuality, and the pure and utter dreamlike state with which [Rose] writes is effortless and engaging, producing [a] story that’s impossible to leave behind... drawing the reader into the depths of a sensual mystery that they will truly never forget! This deserves a standing ovation!"
— Suspense Magazine

“Full of well-researched history, the paranormal, and modern intrigue, this atmospheric tale of suspense is fully engrossing to those willing to suspend their disbelief.”
— Library Journal (starred review)

"Mysterious, haunting, and tragic, Seduction emerges as a suspenseful alchemy of potent ingredients, beautifully blended, that ignites your senses and leaves you aching for more."
— Jamie Ford, New York Times bestselling author of Hotel on the Corner of Bitter and Sweet

"Seduction is an absolute pleasure to read -- clever, suspenseful, exciting, mysterious, learned, and engrossing.  Some of the best historical fiction I've read in quite some time and just plain reading fun.  M.J. Rose is at the top of her game, and that is saying something."
— David Liss, bestselling author of The Twelfth Enchantment

"A sophisticated book that plunges you into a sensual, fascinating world filled with secrets and dreams and ghosts. There's a sweeping, old-world feel to every page, and you'll want to stay here, spellbound, a very long time."
— Caroline Turgeon, author of Mermaid and The Fairest of Them All
or
Not Currently Available for Direct Purchase
Copyright © 2020 American Booksellers Association