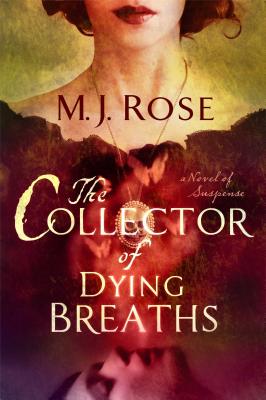 The Collector of Dying Breaths (Hardcover)

“This latest offering from Rose marks the return of Jac L'Etoile, the heroine first introduced in The Book of Lost Fragrances. Jac is quickly engulfed in a quest to create an elixir that will bring souls back to life using a person's last, dying breath. Her patrons are the mysterious Greek heiress Melinoe and her stepbrother, Serge, whose sibling relationship raises many questions for Jac. As Jac's former lover, Griffin, assists her in the pursuit to recreate the elixir based on notes left behind by Rene le Florentine, the two are drawn into the past life of Rene, his lover Isabeau, and the dynamic, manipulative Catherine de Medici. Rose captivates us with a story about relationships past and present, and the most basic of human emotions: love, greed, and betrayal.”
— Stacey Harris, Books & Books, Coral Gables, FL
View the List

A lush and imaginative novel that crisscrosses time as a perfumer and a mythologist search for the fine line between potion and poison, poison and passion…and past and present.

From the internationally bestselling author, a lush and imaginative novel that crisscrosses time as passion and obsessions collide

An orphan named René le Florentin is plucked from poverty to become Catherine de Medici’s perfumer. Traveling with the young duchessina from Italy to France, René brings with him a cache of secret documents from the monastery where he was trained: recipes for exotic fra­grances and potent medicines—and a formula for an alchemic process said to have the poten­tial to reanimate the dead.

In France, René becomes not only the greatest perfumer in the country, but also the most dangerous, creating deadly poisons for his Queen to use against her rivals. But while mixing herbs and essences under the light of flickering candles, René doesn’t begin to imag­ine the tragic and personal consequences for which his lethal potions will be responsible.

A renowned mythologist, Jac L’Etoile—trying to recover from personal heartache by throw­ing herself into her work—learns of the sixteenth-century perfumer who may have been working on an elixir that would unlock the secret to immortality. She becomesobsessed with René le Florentin’s work—particularly when she discovers the dying breaths he had collected during his lifetime.

Jac’s efforts put her in the path of her estranged lover, Griffin North, a linguist who has already begun translating René le Flo­rentin’s mysterious formula. Together they confront an eccentric heiress in possession of a world-class art collection, a woman who has her own dark purpose for the elixir . . . for which she believes the ends will justify her deadly means.

This mesmerizing gothic tale zigzags from the violent days of Catherine de Medici’s court to twenty-first-century France. Fiery and lush, set against deep, wild forests and dimly lit cha­teaus, The Collector of Dying Breaths illuminates the true path to immortality: the legacies we leave behind.

Praise For The Collector of Dying Breaths: A Novel of Suspense…

"M.J. Rose's latest is breathtaking. The Collector of Dying Breaths combines fascinating history, torrid romance and a compelling mystery into a marvelous package that will entice fans of Anne Rice and Diana Gabaldon…Rose has taken an interesting premise and uses history to tell her tale....an original reading experience.”
— Associated Press

“What can I say; M.J. Rose has done it again. She presents a story so intricate and mesmerizing that the reader can get lost in the pages…an excellent choice for avid book clubbers to discuss and debate.”
— Free Lance-Star

"Rose’s latest venture into myth and reality is a page-turning, alluring concoction of fiction infused with fantastical yet actual history. Readers will be charmed by her well-drawn and memorable characters, and they will be mesmerized by her enchanting narrative, which takes them on a mystical and magical journey."
— Library Journal (starred)

“A suspenseful and enigmatic story, with gripping historical details and the paranormal subtext Rose has become famous for, which will please her many fans.”
— Kirkus

“From the labyrinthine alleyways of 16th century Paris to the danger-infused woodlands of 21st century Fontainebleau, M.J. Rose has crafted a superb, mesmerizing tale of two people separated by centuries yet linked by a haunting secret. Poison, obsession and undying love have never been so enticing—or so lethal. I could not stop reading it!”
— C.W. Gortner,  author of The Confessions of Catherine de Medici

"With an alchemist's skill, M.J. Rose mixes present and past with the dark scent of love and an intricate mystery, creating a blend that is splendidly, spookily magical."
—  Susanna Kearsley, New York Times bestselling author

"M.J. Rose masterfully serves up suspense with generous sides of philosophy and intrigue.  I devoured this fascinating tale about Catherine de Medici and her perfumer simmered with the compelling modern-day story of an intelligent woman in search of personal completion.  Alchemy, mythology, and an exploration of reincarnation lace this tantalizing telling.  A lavish and satisfying banquet of a book!"
— Lynn Cullen, bestselling author of Mrs. Poe
or
Not Currently Available for Direct Purchase
Copyright © 2020 American Booksellers Association