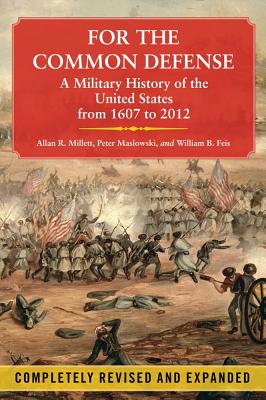 For the Common Defense (Paperback)

Called “the preeminent survey of American military history” by Russell F. Weigley, America’s foremost military historian, For the Common Defense is an essential contribution to the field of military history. This carefully researched third edition provides the most complete and current history of United States defense policy and military institutions and the conduct of America’s wars. Without diminishing the value of its earlier editions, authors Allan R. Millett, Peter Maslowski, and William B. Feis provide a fresh perspective on the continuing issues that characterize national security policy. They have updated the work with new material covering nearly twenty years of scholarship, including the history of the American military experience in the Balkans and Somalia, analyzing the wars in Iraq and Afghanistan from 2001 to 2012, and providing two new chapters on the Vietnam War.

For the Common Defense examines the nation’s pluralistic military institutions in both peace and war, the tangled civil-military relations that created the country’s commitment to civilian control of the military, the armed forces’ increasing nationalization and professionalization, and America’s growing reliance on sophisticated technologies spawned by the Industrial Revolution and the Computer and Information Ages. This edition is also a timely reminder that vigilance is indeed the price of liberty but that vigilance has always been—and continues to be—a costly, complex, and contentious undertaking in a world that continually tests America’s willingness and ability to provide for the common defense.

Peter Maslowski is professor of history at the University of Nebraska, Lincoln.

Praise For For the Common Defense: A Military History of the United States from 1607 to 2012…

"A work of fine research, peer review and precise, evenhanded writing that is standing the test of time." --Kirkus Reviews
or support indie stores by buying on
Copyright © 2020 American Booksellers Association