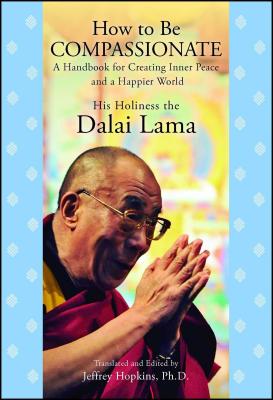 How to Be Compassionate (Paperback)

A Handbook for Creating Inner Peace and a Happier World

Each one of us is responsible for all of humankind, and for the environment in which we live. . . . We must seek to lessen the suffering of others. Rather than working solely to acquire wealth, we need to do something meaningful, something seriously directed toward the welfare of humanity as a whole. To do this, you need to recognize that the whole world is part of you. —from How to Be Compassionate

The surest path to true happiness lies in being intimately concerned with the welfare of others. Or, as His Holiness the Dalai Lama would say, in compassion.

In How to Be Compassionate, His Holiness reveals basic mistakes of attitude that lead us to inner turmoil, and how we can correct them to achieve a better tomorrow. He demonstrates precisely how opening our hearts and minds to other people is the best way to overcome the misguided ideas that are at the root of all our problems. He shows us how compassion can be a continuous wellspring of happiness in our own lives and how our newfound happiness can extend outward from us in ever wider and wider circles.

As we become more compassionate human beings, our friends, family, neighbors, loved ones—and even our enemies—will find themselves less frequently in the thrall of destructive emotions like anger, jealousy, and fear, prompting them to become more warmhearted, kind, and harmonious forces within their own circles. With simple language and startling clarity, His Holiness makes evident as never before that the path to global harmony begins in the hearts of individual women and men. Enlivened by personal anecdotes and intimate accounts of the Dalai Lama’s experiences as a student, thinker, political leader, and Nobel Peace Prize Laureate, How to Be Compassionate gives seekers of all faiths the keys to overcoming anger, hatred, and selfishness— the primary obstacles to happiness—and to becoming agents of positive transformation in our communities and the world at large.

Tenzin Gyatso, the Fourteenth Dalai Lama, is the spiritual leader of the Tibetan people. He frequently describes himself as a simple Buddhist monk. Born in northeastern Tibet in 1935, he was as a toddler recognized as the incarnation of the Thirteenth Dalai Lama and brought to Tibet's capital, Lhasa. In 1950, Mao Zedong's Communist forces made their first incursions into eastern Tibet, shortly after which the young Dalai Lama assumed the political leadership of his country. He passed his scholastic examinations with honors at the Great Prayer Festival in Lhasa in 1959, the same year Chinese forces occupied the city, forcing His Holiness to escape to India. There he set up the Tibetan government-in-exile in Dharamsala, working to secure the welfare of the more than 100,000 Tibetan exiles and prevent the destruction of Tibetan culture. In his capacity as a spiritual and political leader, he has traveled to more than sixty-two countries on six continents and met with presidents, popes, and leading scientists to foster dialogue and create a better world. In recognition of his tireless work for the nonviolent liberation of Tibet, the Dalai Lama was awarded the Nobel Peace Prize in 1989. In 2012, he relinquished political authority in his exile government and turned it over to democratically elected representatives.

His Holiness frequently states that his life is guided by three major commitments: the promotion of basic human values or secular ethics in the interest of human happiness, the fostering of interreligious harmony, and securing the welfare of the Tibetan people, focusing on the survival of their identity, culture, and religion. As a superior scholar trained in the classical texts of the Nalanda tradition of Indian Buddhism, he is able to distill the central tenets of Buddhist philosophy in clear and inspiring language, his gift for pedagogy imbued with his infectious joy. Connecting scientists with Buddhist scholars, he helps unite contemplative and modern modes of investigation, bringing ancient tools and insights to bear on the acute problems facing the contemporary world. His efforts to foster dialogue among leaders of the world's faiths envision a future where people of different beliefs can share the planet in harmony. Wisdom Publications is proud to be the premier publisher of the Dalai Lama's more serious and in-depth works.

Jeffrey Hopkins, Ph.D., served for a decade as the interpreter for the Dalai Lama. A Buddhist scholar and the author of more than thirty-five books and translations, he is emeritus professor of Tibetan and Buddhist studies at the University of Virginia, where he founded the largest academic program of Tibetan Buddhist studies in the West.

Jeffrey Hopkins, Ph.D., served for a decade as the interpreter for the Dalai Lama. A Buddhist scholar and the author of more than thirty-five books and translations, he is emeritus professor of Tibetan and Buddhist studies at the University of Virginia, where he founded the largest academic program of Tibetan Buddhist studies in the West.
or support indie stores by buying on
Copyright © 2020 American Booksellers Association