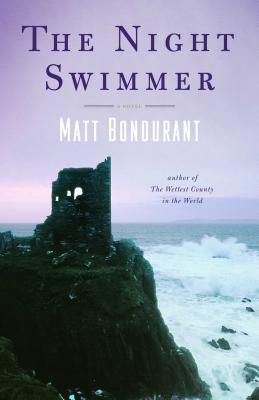 From the “remarkable storyteller” ( San Francisco Chronicle ) and highly acclaimed author of The Wettest County in the World comes a suspenseful novel about a young American couple who win a pub on the southernmost tip of Ireland and become embroiled in local violence and intrigue.

Matt Bondurant’s novel The Wettest County in the World was a New York Times Editor’s Pick, one of the San Francisco Chronicle ’s 50 Best Books of the Year, and is being made into a major motion picture. Now, Bondurant has delivered The Night Swimmer, an atmospheric tale infused with Hitchcockian suspense.

When Fred and Elly Bulkington arrive in a small town on the southern coast of Ireland from Vermont, having won a pub in a contest, they encounter a wild, strange land and the native resistance to outsiders. As Fred immerses himself in the life of a pub-owner, Elly takes the ferry out to a nearby island where she—to the disbelief of the locals—is consumed by her ritual of open water ocean swimming, pushing herself to the limits. Elly becomes enmeshed in the island’s troubles—the power struggles between an enigmatic goat herder and the family that has controlled the area for centuries—while Fred’s sanity wavers and their marriage begins to unravel.

Filled with lush imagery of the Irish coast, crashing sea, rolling hills, and rich Irish lore, The Night Swimmer is a stunning novel that exposes the dark and unseen crevasses in the human heart.

Matt Bondurant is the author of three novels, the most recent of which is The Night Swimmer. Lawless—previously published as The Wettest County in the World—was a New York Times Editors’ Choice, and one of the San Francisco Chronicle’s 50 Best Books of the Year. His first novel, The Third Translation, was an international bestseller, translated into fourteen languages worldwide. He currently teaches literature and writing in the Arts and Humanities graduate program at the University of Texas at Dallas.

Praise For The Night Swimmer: A Novel…

“The Night Swimmer,” it seems to me, is best approached — andappreciated — as a tone poem, evocative and often lyrical in its descriptionsof Ireland’s landscape, lore, cadences and character.” —San Francisco Chronicle

“Bondurant has written another nervy, robust and suspenseful novel.” --Kirkus

“The Night Swimmer is intriguing, seductive, treacherous, and frightening. His writing is so beautiful, poignant, and poetic, that the book is worth a second read.” —Lynne Cox, author of Swimming to Antarctica and Grayson

“Before you plunge into The Night Swimmer, be forewarned: there will be ghosts (and goats), and Gaelic spells cast by black waves of invisible power. But mostly you will be dazzled by the sheer force of Matt Bondurant’s storytelling. In prose as rugged as Ireland’s coastline and just as enchanting, Bondurant has offered up a breathtaking story of what happens when dreams come true and hearts are unbridled.” —Betsy Carter, author of Swim to Me and The Puzzle King

"Bondurant uses the forbidding landscape of thesouthern Irish coast, blasted by wind and rain and always in the grip ofthe ocean, 'a kingdom of darkness and cold,' to generate remarkable tension,both psychological and somehow atmospheric..." -Booklist

"But when Bondurant explores what it is like to push yourself to the brink, whether with physical activity, drugs and alcohol, or lust, he captures an intensity of experience the reader won’t soon forget."
-BookPage
or
Not Currently Available for Direct Purchase
Copyright © 2020 American Booksellers Association