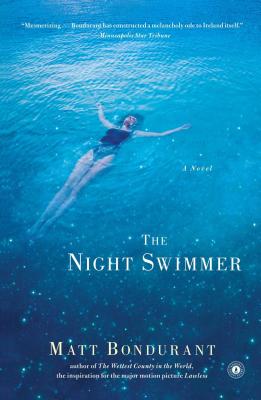 An “evocative and often lyrical” (San Francisco Chronicle) novel about a young American couple who win a pub on the southernmost tip of Ireland and become embroiled in the local violence and intrigue.

The Night Swimmer, Matt Bondurant’s utterly riveting modern gothic novel of marriage and belonging, confirms his gift for storytelling that transports and enthralls.

In a small town on the southern coast of Ireland, an isolated place only frequented by fishermen and the occasional group of bird-watchers, Fred and Elly Bulkington, newly arrived from Vermont having won a pub in a contest, encounter a wild, strange land shaped by the pounding storms of the North Atlantic, as well as the native resistance to strangers. As Fred revels in the life of a new pubowner, Elly takes the ferry out to a nearby island where anyone not born there is called a “blow-in.” To the disbelief of the locals, Elly devotes herself to open-water swimming, pushing herself to the limit and crossing unseen boundaries that drive her into the heart of the island’s troubles—the mysterious tragedy that shrouds its inhabitants and the dangerous feud between an enigmatic farmer and a powerful clan that has no use for outsiders.

The poignant unraveling of a marriage, the fierce beauty of the natural world, the mysterious power of Irish lore, and the gripping story of strangers in a strange land rife with intrigue and violence—The Night Swimmer is a novel of myriad enchantments by a writer of extraordinary talent.

Praise For The Night Swimmer: A Novel…

"Bondurant has given us a group of characters full of life and danger....This is a story that will stay with you." —Seattle Post-Intelligencer

Matt Bondurant is the author of three novels, the most recent of which is The Night Swimmer. Lawless—previously published as The Wettest County in the World—was a New York Times Editors’ Choice, and one of the San Francisco Chronicle’s 50 Best Books of the Year. His first novel, The Third Translation, was an international bestseller, translated into fourteen languages worldwide. He currently teaches literature and writing in the Arts and Humanities graduate program at the University of Texas at Dallas.
Loading...
or support indie stores by buying on