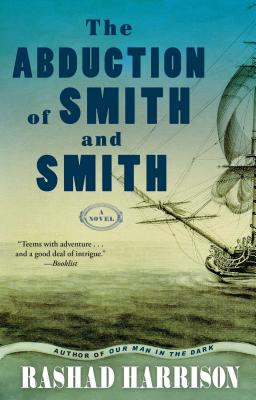 The Abduction of Smith and Smith

In this “splendid tale of high-seas adventure” (Marcus J. Guillory, author of Red Now and Laters), two enemies become the unlikeliest of allies as they fight to save their own lives aboard a hell ship headed into the dangerous unknown.

The Civil War is over, though for Jupiter Smith, a former slave and Union soldier, many battles still lie ahead. He returns to the plantation he worked on before the war in search of his woman, but instead finds his old master gone mad, haunting the ruins like a ghost. Out of pity for the now mentally ill colonel, Jupiter strangles him and heads west to seek a new life in San Francisco.

When the colonel’s son, Confederate soldier Archer Smith, arrives home and finds his father murdered, he vows revenge upon Jupiter for all he has lost—following his former slave to the far reaches of the continent.

But things take a new turn as Archer’s desire for retribution is overwhelmed by his dependency on opium, and he ends up the target of a gang of “crimpers”…the very gang that Jupiter works for in San Francisco. When Jupiter fails in an attempt to save Archer, they both end up shanghaied aboard a ship headed on a dangerous mission and ruled by a merciless captain. Will the two Smiths work together to stay alive and return home, or will they become victims of the sea, the crew, and their mad captain?

Praise For The Abduction of Smith and Smith: A Novel…

"A splendid tale of high-seas adventure that examines the ironies of freedom in post-Civil War America, steeped in the desperate hope to reunite family. Harrison's second offering is not short on plot yet maintains both thoughtful and dastardly characters who insist on defining freedom on their own terms . . . . come hell or high water."
— Marcus J. Guillory, author Red Now and Laters

“Filled with adventure, this sweeping novel also reflects the complexities of slavery, freedom, and shared history.”

PRAISE FOR RASHAD HARRISON'S OUR MAN IN THE DARK

“An entertaining work of historical fiction with a touch of the noir; readers who enjoyed Don Delilo’s Libra will appreciate.”

“The dark conclusion descends into powerful moral ambivalence about love, loyalty and family.”

“A well-written journey back in time.”

“Harrison’s debut mystery offers a fascinating setting for his intriguing mix of fact and fiction.”

Rashad Harrison has studied writing at San Francisco State University and Columbia University. He received his MFA in creative writing from New York University where he was a Jacob K. Javits Fellow in fiction and taught creative writing. He and his wife currently live in Chicago and San Francisco. He is the author of Our Man in the Dark (2011) and The Abduction of Smith and Smith (2015).
Loading...
or
Not Currently Available for Direct Purchase