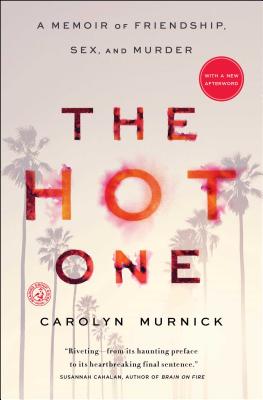 A true-crime, coming-of-age story with a tragic twist: a New York editor’s quest to uncover the truth about the brutal murder of her wild and seductive friend in a “riveting…and thoughtful examination of how we grow up and apart” (Cosmopolitan).

After high school, Carolyn entered college in New York City and Ashley ended up in Los Angeles, where she quit school to work as a stripper and an escort, dating actors and older men, and experimenting with drugs. The last time Ashley visited New York, Carolyn was shocked by how they had grown apart. One year later, Ashley was stabbed to death at age twenty-two in her Hollywood home.

“Original and engaging” (Kirkus Reviews), The Hot One is the story of Carolyn’s emotional quest to find out what really happened to her oldest friend. It’s a journey that takes her through the hills of Hollywood, into courtrooms in Los Angeles, to strip clubs in Las Vegas, and back to her own childhood memories as she tries to unravel why she and Ashley became so different. How did Ashley end up the overtly sexual risk-taker—the hot one—while Carolyn was seen as the smart one, the observer? Carolyn’s “memoir will shock and fascinate” (Booklist) readers as she explores the power of female friendships and pays tribute to the ones that stay with you long after they’re gone.

Praise For The Hot One: A Memoir of Friendship, Sex, and Murder…

"Both an introspective look at young female friendship and a riveting true-crime tale."
– Entertainment Weekly

"Murnick is an engaging writer and her story of the seamy side of young Hollywood sucks you in like a link to TMZ."
– USA Today

"Riveting...A thoughtful examination of how we grow up and apart."
– Cosmopolitan

"While the specific story is tragic and interesting in its own right, the central themes — of friendship, and of how you can share a childhood with someone, then come to hardly know them at all — will resonate with many."
– The New York Post

"A rueful exploration of how two New Jersey girls, such close friends in fifth grade that they felt they were nearly the same person, found themselves on very different paths."
– Slate

"An elegy to female friendship and the ways it shapes us, even as we grow older and grow apart."
—Refinery29

"Thoughtful and thorough, both in exploring the dynamics of female friendships and reporting from chilling courtroom hearings."
– The Cut

"A true crime page-turner and also a really lovely meditation on friendships between women and the way they change."
– Slate's DoubleX Gabfest

"This fusion of memoir and procedural should be welcomed by readers of autobiography as well as true crime."
– Library Journal

"Carolyn Murnick’s insights into the freighted complexities of youth, beauty, and sexuality, and how these forces collide within long, close female friendships, turn an already affecting murder mystery into a story for our time. Never morbid or sentimental, always honest, The Hot One is a wholly original memoir that explores and unpacks the often vexing reality of what it means to be a young woman in the 21st century."
—Kate Bolick, bestselling author of SPINSTER: Making a Life of One’s Own

"A journalist’s investigation into her childhood friend’s murder—a riveting subject on its own—is so much more in writer Carolyn Murnick’s hands. Murnick exposes the sticky complexity of female friendship and identity. She questions what our debts are to the dead and forces us to look at ourselves. Three pages in and I knew that I wouldn’t get anything else done. I inhaled The Hot One in 24 hours, riveted from its haunting preface to its heartbreaking final sentence."
—Susannah Cahalan, bestselling author of BRAIN ON FIRE: My Month of Madness

"Carolyn Murnick's The Hot One is as suspenseful as it is heartfelt and honest— an affecting, revealing investigation into the mysteries at the heart of young friendship."
—Robert Kolker, author of LOST GIRLS: An Unsolved American Mystery

Carolyn Murnick is an online editor at New York magazine. She received an Emerging Writer Fellowship from the Aspen Institute in 2014. Her personal essays have appeared in two anthologies: Before & After: Stories from New York and Lost & Found: Stories from New York. She lives in Brooklyn and The Hot One is her first book.
Loading...
or support indie stores by buying on