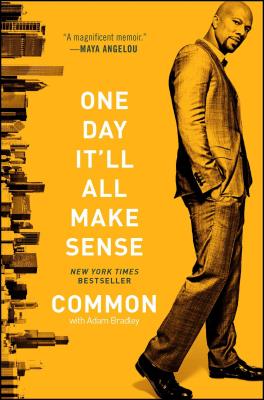 One Day It'll All Make Sense

From the hip hop icon, Hollywood star, and “a true artist and writer of deep talent” (James McBride, author of The Color of Water)—a candid, New York Times bestselling memoir ranging from his childhood on Chicago’s South side and his emergence as one of rap’s biggest names.

Common has earned a reputation in the hip-hop world as a conscious artist by embracing themes of love and struggle in his songs. His journey toward understanding is rooted in his relationship with a remarkable woman, his mother.

Common holds nothing back in this gripping memoir, both provocative and funny. He tells what it was like for a boy with big dreams growing up on the South Side of Chicago. He reveals how he almost quit rapping after his first album sold only two thousand copies. He recounts his rise to stardom and talks about the challenges of balancing fame, love, and family. Through it all, Common emerges as a man in full. Rapper. Actor. Activist. But also father, son, and friend. His story offers a living example of how, no matter what you’ve gone through, one day it’ll all make sense.

Common is an Oscar, Golden Globe, Emmy, and Grammy Award–winning music artist. He is an actor and producer and has appeared in numerous critically acclaimed films as well as hit TV series. Common is the author of One Day It’ll All Make Sense, which was also a New York Times bestseller. He was raised in Chicago and currently resides in Los Angeles and Brooklyn.

Adam Bradley is a scholar of African-American literature and a writer on black popular culture. He is the author of Book of Rhymes: The Poetics of Hip Hop and the co-editor of Ralph Ellison's Three Days Before the Shooting..., and Yale Anthology of Rap . Adam is an associate professor of Literature at the University of Colorado, Boulder and lives in Boulder with his wife.
Loading...
or support indie stores by buying on