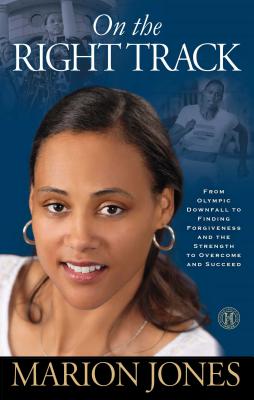 On the Right Track

For more than a decade, Marion Jones was hailed as the “the fastest woman on the planet.” At the 2000 Olympic Games in Sydney, Australia, she became the first woman ever to win five medals at one Olympics. That same year, the Associated Press and ESPN named her Athlete of the Year. She was on the cover of Vogue and Time. She seemed to have it all—fame, fortune, talent, and international acclaim. Now she is a convicted felon.

The trouble started in 2003 when she lied to federal agents about her use of a performance-enhancing drug and her knowledge of a check fraud scam. In 2007, no longer able to live with the lies, she admitted the truth. In a sad end to what seemed like a storybook career, she was stripped of her medals, and her track-and-field records were wiped from the books.

She was incarcerated at Carswell federal prison in Fort Worth, Texas—a prison known for its violence and abuse. While there, she kept herself in shape and her sanity intact by running on a dirt track and a treadmill in the prison’s improvised weight room. But her imprisonment was not the end for Marion Jones. In fact, it marked a new beginning. She is now using her story to change the lives of people the world over and inspire others who, like her, face obstacles that seem insurmountable.

On the Right Track is the candidly told story of how Marion came to grips with her lies and the consequences of her actions, and how she found meaning in all of it. What she tells her children and has now applied to her own life is that when you make a mistake, you admit it, you accept the consequences, you move on, you make the wrong a right. She teaches her children and others to take a break and pause before making impulsive and potentially harmful decisions.

At the heart of this book are real issues that we all face: learning to grow through pain; making decisions that will help us far into the future; overcoming failure and discouragement; and applying practical principles that point the way to personal and spiritual breakthrough.

Praise For On the Right Track: From Olympic Downfall to Finding Forgiveness and the Strength to Overcome and Succeed…

“A revealing and humbling account of a strong woman's pain of self-discovery . . . and how one bad decision, a decision made in less than 30 seconds, can change your life forever."


“Marion's story is a powerful, poignant reminder to us all that being true to yourself provides the power required to achieve success, endure profound failure, and be successful again."


"A forthright account of one athlete’s dizzying rise to fame, her precipitous fall, and the unexpected ramifications of both journeys."

Marion Jones is a former world champion track and field athlete. She won five medals at the 2000 Summer Olympics in Sydney, Australia but voluntarily returned all her Olympic medals and forfieted all her race results from September 2000 after admitting she lied to federal investigators about her use of a performance-enhancing drug.

After her release from prison, Marion sought to take her experiences and encourage others to learn from them. She is actively speaking to teens and other groups and spreading her "Take a Break" message through which she advices young people to stop, take a break, think and seek proper advice from people you trust and who have your best interests at heart before making critical decisions that will have a profound impact on their lives. In short, Marion encourages young and older people alike to stay on track and just do what's right.

Currently, Marion is living a dream deferred and is playing professional basketball as a Rookie for the WNBA team the Tulsa Shock in 2010. She and her husband and children make their home in Austin, Texas.

Maggie Greenwood-Robinson is an accomplished author, co-author, and ghostwriter who has written more than 45 books in the areas of psychology, health, and inspiration. She wrote The Biggest Loser, a New York Times bestseller that was the official diet/fitness book for NBC’s hit reality show of the same name.

Maggie has worked with several high-profile authors, including a popular daytime talk show host, two well-known television doctors, and an international tennis star. Maggie is a member of the Dr. Phil Show Advisory Board and consults regularly on the show’s content. She resides in Dallas, Texas.
Loading...
or support indie stores by buying on