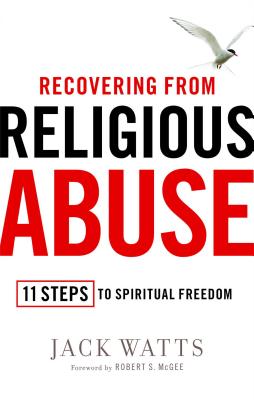 Jack Watts confronts one of Christianity’s deepest secrets and shares his own story of religious abuse, revealing the lifelong self-destructive behavior it produced—now in paperback.

Jack Watts' startling personal story of being victimized by religious abuse and then sinking into alcoholism and self-destructive behaviors will resonate strongly with the many thousands of those who have been disenfranchised or even crushed by institutionalized religion. Recovering from Religious Abuse will help these walking wounded discover how to come to terms with their past as they heal from the inside out.

Jack speaks to his readers as one who has been there, has felt their pain and bitterness, their desire to get even, their belief that they are worthless. But now he shares a new story of one who has finally found spiritual freedom and a deeply satisfying relationship with the God from whom he had once been alienated.

Defining "religious abuse" as the use of spiritual authority to manipulate, harm, or use another person for personal gain, this practical step-by-step recovery manual takes readers on a journey that helps them fully realize the extent of the impact of their religious abuse, and progressively moves them toward healing and recovery. This 91-day plan includes daily readings, prayer, journaling instructions, and scriptures for reflection.

Jack Watts has completed all but his dissertation for a Ph.D. from Emory University. He has worked for nearly three decades in marketing, exclusively serving Christian ministries and publishers. Jack has five children and nine grandchildren and lives in Atlanta.

Praise For Recovering from Religious Abuse: 11 Steps to Spiritual Freedom…

"Jack Watts has written a book that will, can, and has changed lives. It is a book that looks at religious abuse in a real way, yet at the same time, recognizing the importance of faith, religion, and spirituality."
— Mike Furches, pastor of The Virtual Pew, the first Online Community Church
or support indie stores by buying on
Copyright © 2020 American Booksellers Association