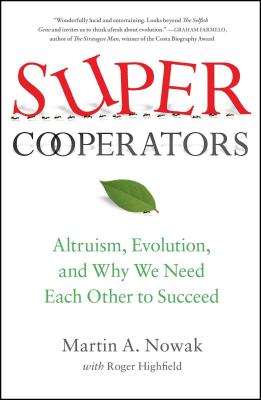 Altruism, Evolution, and Why We Need Each Other to Succeed

"Exactly the message we need to counter the mythology of the 'rugged individual'" (Bill Moyers, Progressive Reader). Martin Nowak, one of the world's experts on evolution and game theory, working here with bestselling science writer Roger Highfield, turns an important aspect of evolutionary theory on its head to explain why cooperation, not competition, has always been the key to the evolution of complexity. In his first book written for a wide audience, this hugely influential scientist explains his cutting-edge research into the mysteries of cooperation, from the rise of multicellular life to Good Samaritans, and from cancer treatment to the success of large companies. With wit and clarity, and an eye to its huge implications, Nowak and Highfield make the case that cooperation, not competition, is the defining human trait. SuperCooperators will expand our understanding of evolution and provoke debate for years to come.

Martin A. Nowak is a professor of biology and mathematics at Harvard University and director of the Program for Evolutionary Dynamics. He established the first center in Theoretical Biology at the Institute for Advanced Study at Princeton. Roger Highfield is the editor of New Scientist magazine. He has written or coauthored six popular science books, two of which have been bestsellers.

Praise For Supercooperators: Altruism, Evolution, and Why We Need Each Other to Succeed…

“[Nowak’s] willingness to argue for group selection, a theory suggesting that evolution operates beyond the genetic level, reawakens old controversies – but he does so using innovative mathematical models, able to incorporate dynamism and uncertainty… Like other great controversialists, Mr. Nowak moves from decision matrices to emotive moral language…all politicians can draw inspiration and ideas from the intellectual resources of this exciting approach.”