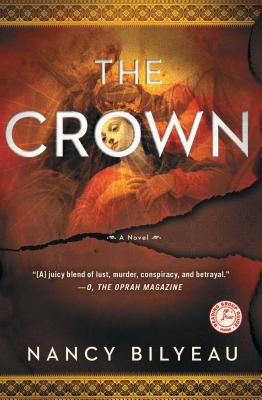 An astonishing debut in historical fiction, hailed as “part The Da Vinci Code, part The Other Boleyn Girl,” (Woman’s Day), The Crown follows one nun’s dangerous quest to find an ancient relic during Cromwell’s reign of terror.

Joanna Stafford, a Dominican nun, learns that her favorite cousin has been condemned by Henry VIII to be burned at the stake. Defying the rule of enclosure, Joanna leaves the priory to stand at her cousin’s side. Arrested for interfering with the king’s justice, Joanna, along with her father, is sent to the Tower of London.

While Joanna is in the Tower, the ruthless Bishop of Winchester forces her to spy for him: to save her father’s life she must find an ancient relic—a crown so powerful, it may possess the ability to end the Reformation.

With Cromwell’s troops threatening to shutter her priory, bright and bold Joanna must decide who she can trust so that she may save herself, her family, and her sacred way of life. This provocative story melds heart-stopping suspense with historical detail and brings to life the poignant dramas of women and men at a fascinating and critical moment in England’s past.

Praise For The Crown: A Novel (Joanna Stafford series)…