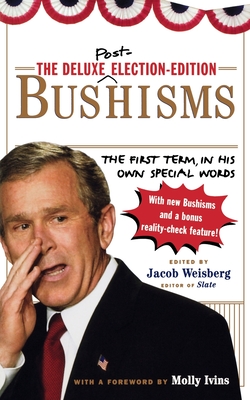 The First Term, in His Own Special Words

The Bush era has been a special time -- for the deficit (back, and larger than ever), for the countries formerly known as our allies, and for the English language. Here it all is, straight from the horse's, er, mouth.

Got that? How about this analysis of the weapons proliferation problem, from the man with his finger on the Button:

Or his belief in the importance of staying connected to us all:

"[A]s you know, these are open forums, you're able to come and listen to what I have to say."

The Deluxe Edition also includes reality checks: coherent Bush statements about major issues that bear no relation to the truth.

The Deluxe Election-Edition Bushisms is essential reading for everyone still wondering what the past four years have all been about.

Jacob Weisberg is the editor of Slate magazine and three previous editions of Bushisms. He lives in New York City.
or support indie stores by buying on
Copyright © 2020 American Booksellers Association