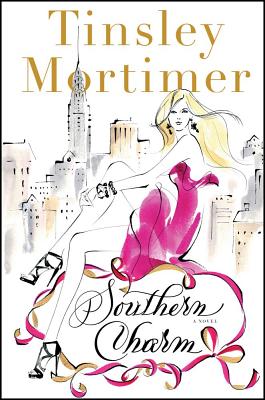 The entertaining first novel by socialite Tinsley Mortimer about a Southern Belle thrust into the frenzied world of high society in New York City.

A modern Manhattan fairy tale with the sparkle of a champagne cocktail, Tinsley Mortimer’s debut novel provides a delicious peek into her world of society, fashion, and big-city fame.

SOUTHERN GIRL Minty Davenport has always dreamed of skyscrapers, yellow cabs, and a life like Eloise’s in New York City. So upon graduation from college, she bids adieu to Charleston and makes a beeline for the Big Apple. Almost instantly, she finds herself at an event being photographed for Women’s Wear Daily, and her career as a New York society “It Girl” is launched. As Minty navigates the ironclad customs of New York society, a blossoming love life, and a job working for a ruthless and powerful publicist, she finds that the rules a southern belle lives by—being nice to everyone, accentuating her femininity, and minding her manners—don’t necessarily guarantee success in Manhattan. She may indeed be accumulating new friends and opportunities along with boldfaced mentions and a very eligible bachelor boyfriend, but someone is plotting her very public downfall. When Minty gets to the top of the social ladder, she must decide if the glamorous life she thought she wanted is really everything she hoped it would be.

Tinsley Mortimer’s insider observations about New York’s elite are deliciously witty, and the heart of her book is that of an irresistibly lovable young woman who is on the brink of finding her dream.

Praise For Southern Charm: A Novel…

“Tinsley Mortimer's first book, Southern Charm, is just that: CHARMING! It’s like a mint julep—sweet, sassy and with a kick, all set against the glittering backdrop of the New York social scene—a modern day fashion fairy tale!”
— Carson Kressley

“Southern Charm will remind you of who you were before you became a jaded New Yorker.”
— Kelly Rutherford

“A delicious journey. . . . It was exactly the escape I was looking for. In the vein of Plum Syke's Bergdorf Blondes, Southern Charm gives a pinhole into a world most will only dream of or read about in Page Six.”

Tinsley Mortimer grew up in Richmond, Virginia, and is a graduate of the Lawrenceville School and Columbia University. She has since been featured on the pages of many fashion and celebrity publications, including Vogue, WWD, Harper’s Bazaar, and Marie Claire. Tinsley has also served as a “Beauty Ambassador” for Christian Dior and currently designs a line of handbags for the Japanese company Samantha Thavasa and her own ready-to-wear line available only in Japan. She lives in New York City.
Loading...
or
Not Currently Available for Direct Purchase