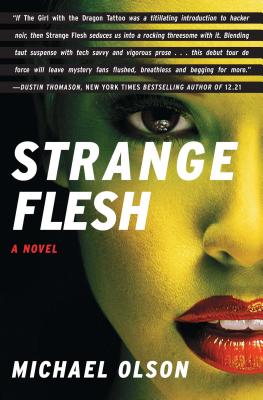 “[An] entertaining entry into the cyber-thriller genre.”—The Toronto Star

“In his head-spinning literary thriller, Olson takes us down a rabbit hole of kinky cybersex and multilevel mystery. . . . Reads like John Fowles’ The Magus reimagined by William Gibson on a Red Bull bender . . . [a] complex, cutting edge debut.”—Publishers Weekly (starred review)

“Readers can choose their poison in this richly composed slab of transgressive fiction by debut novelist Olson—say, a healthy measure of Neal Stephenson crossed with a slice of Warren Ellis with a serious splash of Nicholson Baker’s sex novels. Crossing the barrier between sex, games and virtual reality, the book is likely to be the only Marquis de Sade–influenced thriller this year. . . . For readers with a penchant for this volatile mix of sex, violence and technology, the payoff is rich indeed.”—Kirkus Reviews


“Strange Flesh is a fascinating novel about emerging technology . . . If you enjoy [Neal Stephenson, William Gibson, and Stieg Larsson], as well as Ernest Cline’s great Ready Player One, and a fresh look at where things might be headed with our technology this is one intriguing read. . . . An amazing debut.”—BlogCritics.org