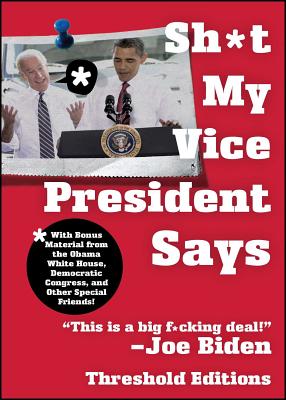 With Bonus Material from the Obama White House, Democratic Congress, and Other Special Friends!

“Hillary Clinton is as qualified or more qualified than I am to be vice president of the United States of America. Quite frankly, it might have been a better pick than me.”

But would she have given us so many priceless verbal gaffes? George W. Bush has left the White House, but Vice President Joe Biden continues his hilarious legacy of memorable misstatements and spoken-word screw-ups.

“Look, John (McCain)’s last-minute economic plan does nothing to tackle the number one job facing the middle class, and it happens to be, as Barack says, a three-letter word: jobs. J-O-B-S, jobs.”

“Stand up, Chuck, let ’em see ya.” (to Missouri state senator Chuck Graham, who is in a wheelchair)

Sh*t My Vice President Says captures every entertaining gem, with extra special commentary and a selection of winning quips from Biden’s silver-tongued compatriots, such as Nancy Pelosi, Rahm Emanuel, and more!