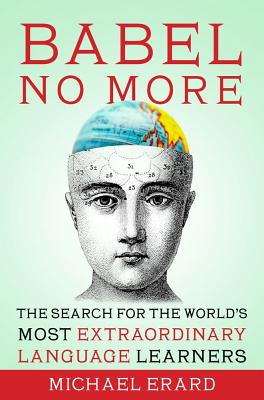 In the tradition of the bestsellers Word Freak and The Language Instinct comes a fascinating exploration of linguistic superlearners whose abilities shed light on the intellectual potential in us all.

What do an Italian cardinal, a Connecticut blacksmith, and a German diplomat have in common with an MIT linguist, a Hungarian translator, and a Scottish church organist? They were all “hyperpolyglots,” “language superlearners,” or “massive multilinguals.” In Babel No More, Michael Erard delves into the lives and minds of these intriguing individuals both past and present and discovers the upper limit of the human ability to learn, speak, and remember languages.

Hyperpolyglots—people who, by one definition, can use six or more languages—are fascinating not simply because what they do is out of the ordinary. Rather, their accomplishments serve as a point of reference for the rest of us—in some ways they are what the author calls a gifted neural tribe, absorbing language for reasons, and with methods, that few people would emulate. But they are also marked by simple, if dogged, methods—the most prolific multilingual in history, Cardinal Mezzofanti, used flashcards. Taken together, their pursuits present a natural experiment into the limits and the nature of memory and language.

Part scientific detective story, part travelogue, part valentine to anyone who’s ever hoped to sprechen or parler something other than a mother tongue, Babel No More takes us all over the world to look at language learning in an entirely new way.

Michael Erard has graduate degrees in linguistics and rhetoric from the University of Texas at Austin. He’s written about language, linguists, and linguistics for Wired, The Atlantic, The New York Times, and many other publications and is a contributing writer for The Texas Observer and Design Observer. He is the author of Um…: Slips, Stumbles, and Verbal Blunders, and What They Mean.