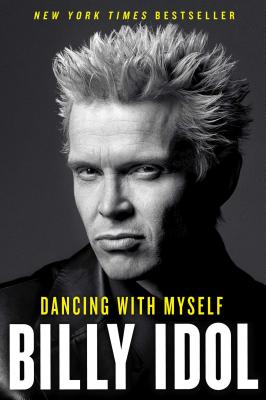 A Rolling Stone Top 10 Best Music Books of the Year

“That’s what I’m talking about…Of all these memoirs, Dancing With Myself was the only one that stimulated my envy—made me want to be Billy Idol for five minutes….He’s a genuine romantic, writing in a kind of overheated journalese about his London punk rock roots…and then falling head over heels for America.” —James Parker, The New York Times Book Review

In this highly original memoir—following Billy Idol from his childhood in England to his rise to fame at the height of the punk-pop revolution—the iconic superstar tells the real story behind the sex, drugs, and rock 'n' roll that he is so fabulously famous for, in his own utterly indelible voice.

An early architect of punk rock’s sound, style, and fury, whose lip-curling sneer and fist-pumping persona vaulted him into pop’s mainstream as one of MTV’s first megastars, Billy Idol remains, to this day, a true rock ‘n’ roll icon.

Now, in his New York Times bestselling autobiography, Dancing with Myself, Idol delivers an electric, “refreshingly honest” (Daily News, New York) account of his journey to fame—from his early days as front man of the pioneering UK punk band Generation X to the decadent life atop the dance-rock kingdom he ruled—delivered with the same in-your-face attitude and fire his fans have embraced for decades. Beyond adding his uniquely qualified perspective to the story of the evolution of rock, Idol is a brash, lively chronicler of his own career.

A survivor’s tale at its heart, this sometimes chilling and always riveting account of one man’s creative drive joining forces with unbridled human desire is unmistakably literary in its character and brave in its sheer willingness to tell. With it, Billy Idol is destined to emerge as one of the great writers among his musical peers.

“I am hopelessly divided between the dark and the good, the rebel and the saint, the sex maniac and the monk, the poet and the priest, the demagogue and the populist. Pen to paper, I’ve put it all down, every bit from the heart. I’m going on out a limb here, so watch my back.” —Billy Idol

Praise For Dancing with Myself…

“[Idol] proves he's more than a punk sneer and spikyhairdo in this extremely candid autobiography about his personal andprofessional relationships. Who knew he was this deep and self-analytical? Idolleaves you wanting ... ‘More! More! More!’”
— David. J. Criblez

Born William Michael Albert Broad, Billy Idol is a multiplatinum recording artist and two-time Grammy nominee. Known for successfully merging his signature punk attitude with an appealing blend of pop hooks, dance beats, and gritty metallic crunch, Idol created some of rock’s most indelible anthems, including “Rebel Yell,” “White Wedding,” and “Cradle of Love.” Idol’s latest release, his first studio album in nearly a decade, is titled Kings & Queens of the Underground. He lives in Los Angeles.
Loading...
or support indie stores by buying on