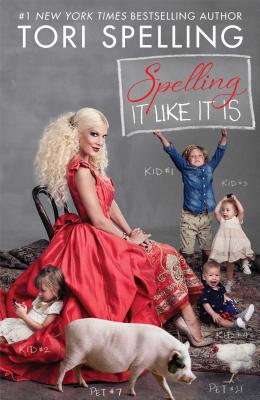 Tori Spelling is the first to admit that the “reality” behind her popular television show, Tori & Dean, isn’t always real. Not even Star Magazine could invent the true chaos that happens behind the scenes. Luckily, Tori is famously honest and self-deprecatingly funny when it comes to her personal life. She’s always Spelling It Like It Is…

THE REALITY BEHIND REALITY TV

Tori Spelling is the first to admit that the “real­ity” behind her popular television show, Tori & Dean, isn’t always real. Not even Star magazine could invent the true chaos that happens behind the scenes. Luckily, Tori is famously honest and self-deprecatingly funny when it comes to her per­sonal life. She’s always Spelling It Like It Is. . . .

Life is never boring at Tori’s house, but since the release of her New York Times bestselling memoirs sTORI Telling, Mommywood, and Un­charted terriTORI, things have been especially unpredictable: finding out she was pregnant with her third baby after nearly vomiting live on the Home Shopping Network; trying to hide her fourth pregnancy so soon after giving birth (as her stylist said, “Who would be that crazy?”); be­ing rescued from a paparazzo by a mom lynch mob; stalking her celebrity neighbor; and allow­ing cameras to film every personal detail of her life—from the most challenging time in her mar­riage to the only time in six years when she really felt as though those cameras invaded her privacy.

Tori shares these stories and many more with the usual humor, candor, and down-to-earth charm that her fans love. She also writes openly about her biggest challenges: the terrifying health problems surrounding her high-risk pregnancy with her youngest son, Finn; her guilt over missing baby Hattie’s early months because she was in the hospital on bed rest; her struggles (and failures) to live within her means after growing up in opulence; the discovery that she has a lot in common with her late mega-producer father, Aaron Spelling; and how she fell in love with Dean all over again (hint: it didn’t happen at their vow renewal ceremony).

After years of revealing her everyday antics on-screen, Tori’s life is still full of surprises. Slowing down long enough to enjoy them? Now that’s another sTORI.

Tori Spelling starred in and executive produced the Oxygen hit reality television series Tori & Dean: Inn Love and Tori & Dean: Home Sweet Hollywood. She recently hosted TLC’s Craft Wars and appeared in the ABC Family original musical The Mistle-Tones. The creator of the online lifestyle magazine ediTORIal at her website torispelling.com, she is also a #1 New York Times bestselling author of three memoirs; a party planning book, celebraTORI; and a children’s book, Presenting…Tallulah. She and her husband, actor Dean McDermott, live in Los Angeles with their four young children, Liam, Stella, Hattie, and Finn.
Loading...
or
Not Currently Available for Direct Purchase