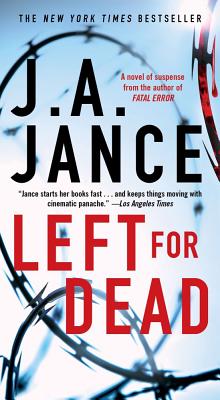 When violence from the drug wars with the Mexican cartels crosses the border into Arizona, and an old friend is murdered, Ali Reynolds steps in to investigate in New York Times bestselling author J.A. Jance’s fast-paced mystery.

When Santa Cruz county deputy sheriff Jose Reyes, one of Ali Reynolds’s classmates from the Arizona Police Academy, is gunned down and left to die, he is at first assumed to be an innocent victim of the drug wars escalating across the border. But the crime scene investigation shows there’s much more to it than that, and soon he and his pregnant wife, Teresa, are both under suspicion.

Ali owes Reyes a debt of gratitude for the help he gave her years earlier. When she’s summoned to his bedside at Mercy Medical Center in Tucson, it’s impossible for Ali to turn away. Upon arriving at the hospital, Ali finds her good friend, Sister Anselm, is there as well, working as a patient advocate on behalf of another seriously injured victim, an unidentified border crosser who was raped and savagely beaten.

As more bodies begin to pile up, Ali becomes determined to seek justice, even when it becomes impossible to know where the danger is coming from. Fast-paced, tension-filled, and intriguingly complex, Left for Dead is J.A. Jance at her riveting best.

J.A. Jance is the New York Times bestselling author of the Ali Reynolds series, the J.P. Beaumont series, and the Joanna Brady series, as well as five interrelated Southwestern thrillers featuring the Walker family. Born in South Dakota and brought up in Bisbee, Arizona, Jance lives with her husband in Seattle, Washington. Visit her online at JAJance.com.
Loading...
or support indie stores by buying on