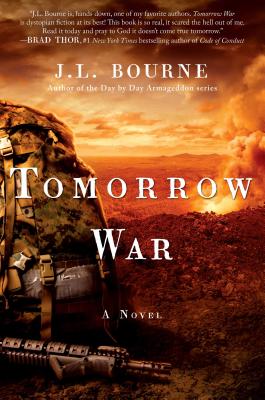 The Chronicles of Max [Redacted]

In this riveting, ultra-realistic novel from J.L. Bourne, a man struggles to survive after the US infrastructure collapses and martial law engulfs the streets of America.

In the not-too-distant future, during an unacknowledged mission inside the Syrian border, a government operative unwittingly triggers an incredible event that alters the course of society. A terrible weapon has been unleashed—a weapon that, left to run its course, will destroy the moral fabric of humanity.

In the midst of crisis, the population struggles to survive in a world short on vital resources. Inflation cripples the US economy and post-war armored military vehicles patrol the streets.

One man stands up to push back the overwhelming wave of tyranny triggered by the onset of nationwide martial law. How can he possibly succeed against a high tech and tyrannical enemy that is hell-bent on ripping liberty from the pages of future history?

From the author and military expert who brought readers the riveting horror series Day by Day Armageddon, Tomorrow War is a compelling account of an alternate dystopian America located just down the tracks of oblivion.

Praise For Tomorrow War: The Chronicles of Max [Redacted]…

"J.L Bourne is, hands down, one of my favorite authors. Tomorrow War is dystopian fiction at its best! The book is so real, it scared the hell out of me. Read it today and pray to God it doesn't come true tomorrow."
— Brad Thor, #1 New York Times bestselling author of Code of Conduct

"A nonstop action thriller that explores the dark side of 'what if' our entire digital and economic grid collapsed. An unforgettable novel."
— Scott McEwen, #1 New York Times bestselling co-author of AMERICAN SNIPER and TARGET AMERICA

J.L. Bourne is a commissioned military officer and acclaimed author of the horror series Day by Day Armageddon, and the dystopian thriller, Tomorrow War. With twenty years of active military and intelligence community service behind him, J.L. brands a realistic and unique style of fiction. He lives on the Gulf Coast but is sometimes spotted toting a rifle and a Bowie knife in the rural hills of Arkansas where he grew up. Visit him at JLBourne.com before the grid goes dark.
Loading...
or
Not Currently Available for Direct Purchase