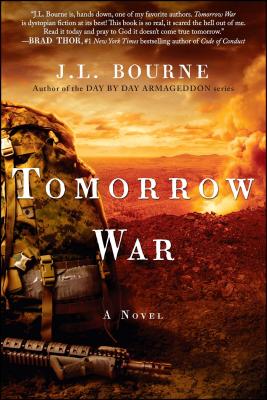 The Chronicles of Max [Redacted]

J.L. Bourne’s apocalyptic novel Day by Day Armageddon was praised by #1 bestseller Brad Thor as “so real, so terrifying…that I slept with two loaded Glocks under my pillow.” In this ultrarealistic military thriller, the collapse of America’s power grid threatens the world’s fate—and only those prepared for the ultimate catastrophe will survive.

On an unacknowledged mission inside the Syrian border, a government operative unwittingly triggers an incredible event that unleashes a weapon with the power to destroy the moral fabric of humanity. As the crisis unfolds, hyperinflation cripples the US economy. Families struggle to find food, water, and electricity. Post-war armored military vehicles patrol the streets as martial law is imposed.

The US government appears to offer salvation, but there is a sinister catch...

One man stands up to push back against a high tech, tyrannical enemy hell-bent on ripping liberty from the pages of future history. But as vital supplies and makeshift weaponry are running out, so is time…and he will have to use every resource and survival tactic to fight for survival: for himself and his home.

Praise For Tomorrow War: The Chronicles of Max [Redacted]…

J.L Bourne is, hands down, one of my favorite authors. Tomorrow War is dystopian fiction at its best! The book is so real, it scared the hell out of me. Read it today and pray to God it doesn't come true tomorrow.
— Brad Thor, #1 New York Times bestselling author of Code of Conduct

"A nonstop action thriller that explores the dark side of 'what if' our entire digital and economic grid collapsed. An unforgettable novel."
— SCOTT MCEWEN, #1 New York Times bestselling co-writer of American Sniper and Target America