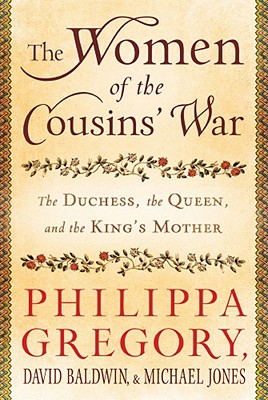 The Women of the Cousins' War

The Duchess, the Queen, and the King's Mother

In her essay on Jacquetta, Philippa Gregory uses original documents, archaeology, and histories of myth and witchcraft to create the first-ever biography of the young duchess who survived two reigns and two wars to become the first lady at two rival courts. David Baldwin, established authority on the Wars of the Roses, tells the story of Elizabeth Woodville, the first commoner to marry a king of England for love. And Michael Jones, fellow of the Royal Historical Society, writes of Margaret Beaufort, the almost-unknown matriarch of the House of Tudor.

Beautifully illustrated throughout with rare portraits and source materials, The Women of the Cousins’ War offers fascinating insights into the inspirations behind Philippa Gregory’s fiction and will appeal to all with an interest in this epic period.

Praise For The Women of the Cousins' War: The Duchess, the Queen, and the King's Mother…

"[Gregory] again brings insight to English history, recreating the power struggle between two of the nation's most notable women in a tale fresh for modern readers. There's no question that she is the best at what she does." --Associated Press

“An engaging and interesting read . . . Fans of Gregory’s novels should enjoy this glimpse into both her creative process and her essays on the three women who served as inspiration for her ‘Wars of the Roses’ novels.”
— The Post and Courier (Charleston)

“The publication of two books this season by Philippa Gregory gives us not only two more fascinating portraits of the English Wars of the Roses, it also opens a window onto the way the bestselling author of The Other Boleyn Girl applies her craft.”
— Los Angeles Times

David Baldwin taught history at the Universities of Leicester and Nottingham for many years, and is the author of four books dealing with people and events of the Wars of the Roses, including the acclaimed Elizabeth Woodville, Mother of the Princes in the Tower.

Michael Jones did his Ph.D. on the Beaufort family, and subsequently taught at the University of South West England, the University of Glasgow, and Winchester College.  He is a Fellow of the Royal Historical Society and now works as a writer and media presenter.  He is the author of six books, including The King's Mother, a highly praised biography of Margaret Beaufort, which was shortlisted for the Whitfield Prize.
Loading...
or
Not Currently Available for Direct Purchase