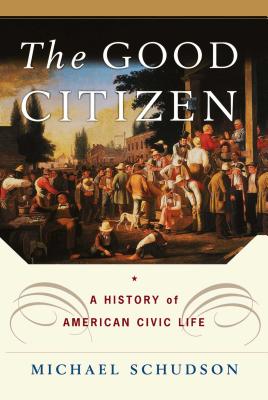 A History of American CIVIC Life

In 1996 less than half of all eligible voters even bothered to vote. Fewer citizens each year follow government and public affairs regularly or even think they should. Is popular sovereignty a failure?
Not necessarily, argues Michael Schudson in this provocative and unprecedented history of citizenship in America. Measuring voter turnout or attitudes is a poor approximation of citizenship. The meaning of voting -- and what counts as politics -- has changed dramatically over the course of our history. We have passed through three distinct eras in the definition and demonstration of good citizenship, and we are now struggling to find a footing in a fourth.
When the nation was founded, being a citizen meant little more than for property-owning white males to delegate authority to a local gentleman -- and accept his complimentary glass of rum on election day. This "politics of assent" gave way early in the nineteenth century to a "politics of parties." Parties conducted elaborate campaigns of torchlight processions and monster meetings; voting day was filled with banter, banners, fighting, and drinking. Party ticket peddlers handed voters preprinted tickets to place in the ballot box before stepping over to the tavern for a few dollars' reward from the party. We now call this corruption. At the time, it was called loyalty.
The third model of citizenship, ushered in by Progressive reformers, was a "politics of information." Campaigning became less emotional and more educational. Voting was by secret ballot. With civil-service reform, parties were limited in the rewards they could bestow. This was the era of the "informed voter." Under this scheme, the twentieth century has been ruled by everyone, and no one, all at once.
Today, after the rights revolution, political participation takes place in schools, at home, at work, and in the courts. We have made "informed citizenship" an overwhelming task. Schudson argues that it is time for a new model, in which we stop expecting everyone to do everything. The new citizenship must rest on citizens who are monitors of political danger rather than walking encyclopedias of governmental news. This fascinating tour of the past makes it possible to imagine a very different -- and much more satisfying -- future.

Michael Schudson is Professor of Communication and Adjunct Professor of Sociology at the University of California at San Diego. He is the author of several highly acclaimed books on the media, including Discovering the News and Advertising, the Uneasy Persuasion. He lives in San Diego.
Loading...
or support indie stores by buying on