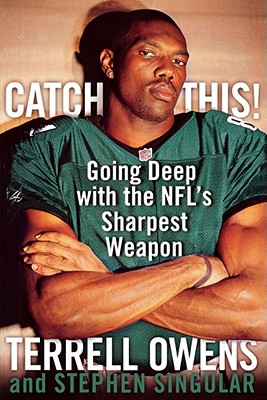 In a sport full of players who are larger than life, Terrell Owens towers above the crowd.

It isn't just that he holds the NFL record for catches in a single game (twenty) or that he's the most feared wide receiver in the game. It's also his penchant for unique self-expression -- spiking the ball on the midfield Texas lone star in front of a hostile Dallas Cowboy crowd, pulling a Sharpie from his sock to sign a game ball after a touchdown, and dancing with a cheerleader's pom-poms after another TD. Never politically correct and always controversial and colorful on and off the field, Terrell Owens has transformed himself into "TO," the outrageous gridiron personality who has rocked the entire NFL and the sports landscape. But Owens is more than touchdowns, dancing, and celebrations. In this wickedly insightful book, he's full of sharp-eyed observations on the contentious, demanding, insane phenomenon that is pro football.

In Catch This! Owens takes readers back to his hardscrabble childhood in rural Alabama, where he was raised by a stern grandmother and loving mother. By the time he won an athletic scholarship for football at the University of Tennessee-Chattanooga, the once small, bullied boy had transformed himself into a very large man with a super body and an iron will to succeed. He takes us behind his apprenticeship to -- and eventual eclipsing of -- the legendary 49ers wide receiver Jerry Rice. He pulls no punches when it comes to his extremely public fight with San Francisco coach Steve Mariucci -- a relationship so sour that they didn't speak at all during the crucial final weeks of the 2001 season. And, finally, he lets loose on the free agent scandal that shook the NFL in 2004 -- and reveals the truth behind the NFL's attempt to deny him free agency, his fraudulent trade to the Baltimore Ravens, and his ultimate happy landing with the Philadelphia Eagles.

For those who think they know both Terrell Owens and TO, catch this story.

Terrell Owens is a perennial all-pro wide receiver. In 2005 he became only the sixth receiver in NFL history with 100 touchdown receptions. His reality series, The T.O. Show airs on VH1. Terrell currently plays for Buffalo Bills.

Visit the author at www.terrellowens.com

Stephen Singular has authored or coauthored seventeen previous books, including numerous New York Times and Los Angeles Times bestsellers. His titles include Presumed Guilty: An Investigation into the JonBenet Ramsey Case, the Media, and the Culture of Pornography; and Anyone You Want Me to Be: A True Story of Sex and Death on the Internet, coauthored with legendary FBI profiler John Douglas. Formerly a staff writer for the Denver Post, he lives in Denver. Visit his website at www.stephensingular.com.
Loading...
or support indie stores by buying on