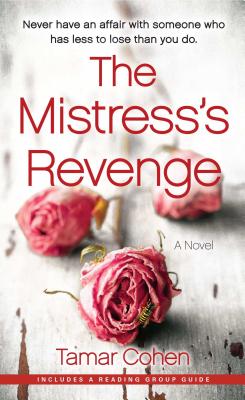 There’s a fine line between love and hate.

For five years, Sally and Clive have been lost in a passionate affair. Now he has dumped her to devote himself to his wife and family, and Sally is left in freefall.

It starts with a casual stroll past his house, and popping into the brasserie where his son works. Then Sally starts following Clive’s wife and daughter on Facebook. But that’s alright, isn’t it? These are perfectly normal things to do. Aren’t they?

Not since Fatal Attraction has the fallout from an illicit affair been exposed in such a sharp, darkly funny, and disturbing way: The Mistress’s Revenge is a truly exciting fiction debut. After all, who doesn’t know an otherwise sane woman who has gone a little crazy when her heart was broken?

“A cracking debut. . . .very Fatal Attraction with a clever twist at the end. Addictive stuff.”
—The Bookseller

Praise For The Mistress's Revenge: A Novel…

“A cracking debut. . . .very Fatal Attraction with a clever twist at the end. Addictive stuff.”
—The Bookseller