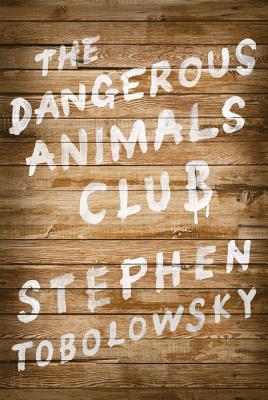 From legendary character actor Stephen Tobolowsky, comes a collection of memoiristic pieces about life, love, acting, and adventure, told with a beguiling voice and an uncommon talent for storytelling.

The Dangerous Animals Club by Stephen Tobolowsky is a series of stories that form a non-linear autobiography. Each story stands on its own, and yet there are larger interconnecting narratives that weave together from the book's beginning to end. The stories have heroics and embarrassments, riotous humor and pathos, characters that range from Bubbles the Pigmy Hippo to Stephen's unforgettable mother, and scenes that include coke-fueled parties, Hollywood sets, French trains, and hospital rooms.

Told in a vivid, honest, and wondrous voice, Tobolowsky manages to render the majestic out of the seemingly mundane, profundity from the patently absurd, and grace from tragedy. This book marks the debut of a massively talented storyteller.

Praise For The Dangerous Animals Club…

“Stephen Tobolowsky has found his true calling as a storyteller. He is candid, insightful, often profound, and very, very funny, especially when he recounts his adventures in show business. By blending sharp memories of his childhood with astute, adult observations of the world around him, he weaves a spell not unlike Jean Shepherd or Garrison Keillor… but he has a voice all his own, and I love it.”—Leonard Maltin, film critic and author

"No one spins yarns and knits them into a lyrical fabric of self like Tobolowsky: deep, warm and a little itchy but you love it."—Marc Maron, host of WTF with Marc Maron

"You know those imaginary dinner parties where you get to invite any five people from history for an evening of amazing conversation? This book is the reason Stephen Tobolowsky has always been one of my five. He is a raconteur of the first order, and I think an evening with Beethoven, Abe Lincoln, and Winston Churchill would be made ever more fascinating for his inclusion. But it’s not just that his stories are compulsively entertaining. It’s that they resound with insight and revelation. Tobolowsky’s stories make me glad I’m alive. And they make me want to throw a dinner party every night."—Jim Beaver, actor in Deadwood and Supernatural and author of Life's That Way

"You already know Stephen Tobolowsky as an actor—his face, if not his name—but in The Dangerous Animals Club he opens his heart, soul and mind to you, along with a lot of belly laughs. He is a modern-day Job in his pursuit of an acting career, or maybe just a meaningful life. The odds seem stacked against him. And yet now, in the middle of his life, it is all within his grasp. Read this book and rejoice!"—Elizabeth Forsythe Hailey, author of A Woman of Independent Means

“Funny, highly original, and quirky. Stephen Tobolowsky has written a memoir that is almost as enchanting and lovable as he is. Bravo!”—Linda Bloodworth Thomason

“Hard to find a guy in Hollywood whose colossal loyalty stands right up their with his colossal talent. Now I see what shaped it all. A great book from an uncommon man!”—Harry Thomason

“The actor has plenty of rich material to mine—he has been held hostage at gunpoint by a lunatic, suffered an apocalyptic infestation of fleas, barely eluded a goring by a bull, and auditioned with a broken neck—but the delight of the book is the author’s voice: wry, discursive and full of generous spirit and curiosity […] A copiously examined life rendered with humor and heart.” — Kirkus, Starred Review

“Stories that are quirky, funny and sentimental.” — Publishers Weekly

"These stories are about life, and about love, and about finding inspiration in anything, and they are told with enthusiasm, and optimism, and joy for life. I hate to sound like I’m overselling it, but I think anyone who has listened to a The Tobolowsky Files will agree: They are a goddamn pleasure."—Dustin Rowles

"The Citizen Kane of podcasts."—DC Pierson of Derrick Comedy

"[The book] deals with… first love and heartbreak, early efforts to break into show business, and the sometimes hazy line between perception and truth…. Tobolowsky’s narratives have a haunting, elliptical quality with motifs that circle back when you least expect it—one of the advantages, he speculates, of never shooting scenes in order. Above all, they’re humane.”–Jenny Lower, Los Angeles Magazine

“Profound delight…At its core, "The Dangerous Animals Club" is about an artist's passionate, heartbreaking and sometimes hilarious commitment to his calling… What Tobolowsky brings to all his stories is a pitch-perfect ability to tell a story…That's the goal for all artists: To create work that deeply touches and moves other human beings. Stephen Tobolowsky hits the mark in "The Dangerous Animals Club."
— Joseph Bednarik

"The Dangerous Animal Club runs the gamut between the youthful, dreamlike compulsions of a brainy little boy, to the recollections and misadventures of a struggling actor in Los Angeles in the past 30 years, and in between you have story-telling at its finest: well-written, poignant, hysterical, heart-wrenching and above all — wise."
— Domingo Martinez, bestselling author of The Boy Kings of Texas