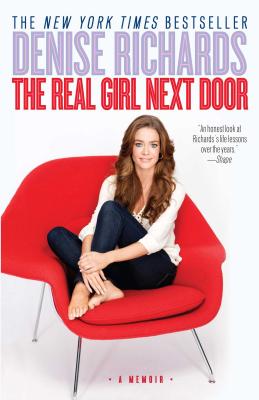 The Real Girl Next Door (Paperback)

We’ve read the scandalous headlines, watched her sexy breakout performances in Starship Troopers and Wild Things, and seen her many public faces on her reality television show—the beautiful vixen, the devoted mother, the hard-working entertainer, and the fun-loving friend. But how well do we really know Denise Richards?

Like so many small-town girls, she dreamed of making it big in Hollywood. But following a painful, high-profile divorce from Charlie Sheen, she found herself raising their two young daughters alone as her mother was dying of cancer. Denise writes openly and honestly about these experiences and more: she lets you in on her childhood dreams, her fated move to Hollywood with her close-knit family, her rise to fame, the pressures of living in the spotlight, and the controversy surrounding her relationships. Through it all, she managed to keep her sense of humor and optimism.

She offers an up-close and personal look at her most intimate battle scars and the lessons she’s learned as she’s healed and grown. Denise’s story will resonate with anyone who has had to look within herself to find strength and courage when life is throwing curveballs.

Inspiring and uplifting, raw and revealing, Denise finally lets her fans in on the resilient woman behind the bombshell persona, the person her friends and family already know: The Real Girl Next Door.

Born outside of Chicago, Denise Richards began working as a fashion model and moved to L.A. after she graduated from high school. She landed parts in both TV and movies, and gave breakthrough performances in Starship Troopers (1997) with Casper Van Dien, Wild Things (1998) and The World Is Not Enough (1999), in which she plays a Bond Girl. She also was in Undercover Brother (2002) with Eddie Griffin and appeared in Scary Movie 3 (2003). She was the star of E!’s Denise Richards: It’s Complicated in 2008 and 2009 and will star in a film in December 2010 called Mother’s Little Helpers. She also has a recurring role in the second season of Spike TV’s Blue Mountain State in 2011.
or support indie stores by buying on
Copyright © 2020 American Booksellers Association