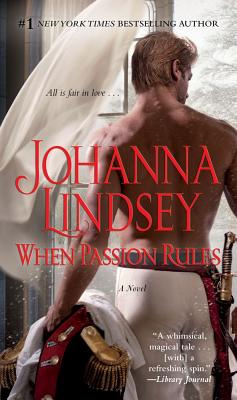 On the eve of her debut into London society, Alana Farmer learns the shocking secret of her birthright. Can it be true? Is she really the lost princess of the European kingdom of Lubinia? Returning to the homeland she and her guardian fled when she was an infant to escape Napoleon’s rampaging army, Alana attempts to quell a bloody revolt in this isolated, mountainous country whose customs strike her as medieval! Suspicious that this beautiful newcomer is a wily imposter or a spy scheming to depose the king, Christoph Becker, the captain of the palace guards, arrests Alana and vows to draw the truth from his alluring prisoner, even if he must lay his life on the line to protect her from harm. Now, as a fiery passion flares between Alana and the man who has wrongly imprisoned her, the fate of a nation rests in their hands and on their hearts.

Johanna Lindsey (1952–2019) was world-renowned for her “mastery of historical romance” (Entertainment Weekly), with more than sixty million copies of her novels sold. She was the author of nearly sixty nationally bestselling novels, many of which reached the #1 spot on the New York Times bestseller list.
Loading...
or support indie stores by buying on