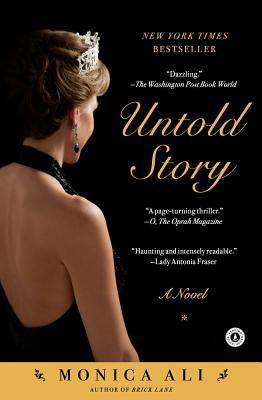 The New York Times bestseller from one of the most versatile and bold writers of our time—“an astonishing, tightly structured, and lyrically told” novel (People) inspired by Princess Diana.

What if Princess Diana hadn’t died? Diana’s life and marriage were fairy tale and nightmare rolled into one. Adored by millions, in her personal life she suffered rejection, heartbreak, and betrayal. Surrounded by glamour and glitz and the constant attention of the press, she fought to carve a meaningful role for herself in helping the needy and dispossessed. Had she lived, what direction would her life have taken? How would she have matured into her forties and beyond?

Untold Story is about the nature of celebrity, the meaning of identity, and finding one’s place in the world. Like Diana, the fictional heroine of this novel is both icon and iconoclast. She touches many millions of lives and hearts around the world, sharing the details of her troubled marriage and her eating disorder, and reaching out as has no other royal before her. But she is troubled and on the brink of disaster. Will she ever find peace and happiness, or will the curse of fame be too great?


“A dazzling feat... All the pistons are firing.”—Washington Post

Monica Ali was born in Dhaka, Bangladesh, and grew up in England. She was named one of the 20 best young British novelists under 40 by Granta. She is the author of four previous novels, including Untold Story and Brick Lane, which was shortlisted for the Booker Prize and the Guardian Book Prize, nominated for the National Book Critics Circle Award and the Los Angeles Times Book Prize, and was named a winner of the 2003 Discover Award for Fiction and a New York Times Editors’ Choice Book that same year. She lives in London with her husband and two children.
Loading...
or
Not Currently Available for Direct Purchase