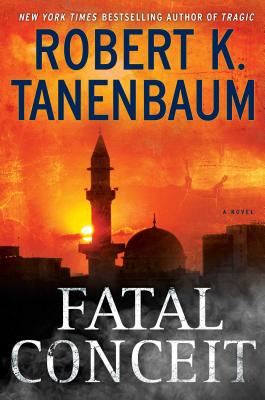 A CIA chief dies under suspicious circumstances before he is about to testify about a controversial government cover-up involving a terrorist attack on the US mission in Chechnya. Butch Karp is on the case in this exciting installment to Robert K. Tanenbaum’s bestselling series.

When the CIA director is murdered, Butch Karp finds himself battling a heavyweight opponent: the US government. The national presidential election campaign’s foreign policy mantra has been that the terrorists are on the run and Bin Laden is dead. There are rumors that the CIA chief was going to deviate from the administration version of events, and that the government may have had something to do with his death. Can Karp expose the cover-up and find the Chechnyan separatists who aided the Americans at the mission and who have firsthand knowledge of the terrorist attack? Karp must also find his missing daughter, who has been taken hostage by the terrorists.

After the New York grand jury indicts the national presidential campaign chairman and the NSA spymaster for the murder of the CIA chief, Karp engages in an unforgettable courtroom confrontation with the defendants who have the full weight of the US administration, a hostile judge, and a compliant media supporting them. These sinister forces will stop at nothing to prevent Karp from bringing out the truth, even if they have to resort to murder.

Robert K. Tanenbaum is the author of thirty-two books—twenty-nine novels and three nonfiction books: Badge of the Assassin, the true account of his investigation and trials of self-proclaimed members of the Black Liberation Army who assassinated two NYPD police officers; The Piano Teacher: The True Story of a Psychotic Killer; and Echoes of My Soul, the true story of a shocking double murder that resulted in the DA exonerating an innocent man while searching for the real killer. The case was cited by Supreme Court Chief Justice Earl Warren in the famous Miranda decision. He is one of the most successful prosecuting attorneys, having never lost a felony trial and convicting hundreds of violent criminals. He was a special prosecution consultant on the Hillside strangler case in Los Angeles and defended Amy Grossberg in her sensationalized baby death case. He was Assistant District Attorney in New York County in the office of legendary District Attorney Frank Hogan, where he ran the Homicide Bureau, served as Chief of the Criminal Courts, and was in charge of the DA’s legal staff training program. He served as Deputy Chief counsel for the Congressional Committee investigation into the assassinations of President John F. Kennedy and the Rev. Dr. Martin Luther King, Jr. He also served two terms as mayor of Beverly Hills and taught Advanced Criminal Procedure for four years at Boalt Hall School of Law, University of California, Berkeley, and has conducted continuing legal education (CLE) seminars for practicing lawyers in California, New York, and Pennsylvania. Born in Brooklyn, New York, Tanenbaum attended the University of California at Berkeley on a basketball scholarship, where he earned a B.A. He received his law degree (J.D.) from Boalt Hall School of Law at the University of California, Berkeley. Visit RobertKTanenbaumBooks.com.

“Butch [Karp] is doing his courtroom dance, making fools of the smug politicians he believes were behind the murder.  Tanenbaum shines in these positively balletic moments...[a] reliable thriller.”
— Booklist

“Butch Karp is the best fictional prosecuting attorney in literature. . . . Tanenbaum is a phenomenal attorney and a remarkable storyteller: It is almost unfair to the rest of us. . . . Outrage grabs you at the outset and astonishes at each page . . . Riveting.”
— #1 New York Times bestselling author Mark Lane
or
Not Currently Available for Direct Purchase
Copyright © 2020 American Booksellers Association