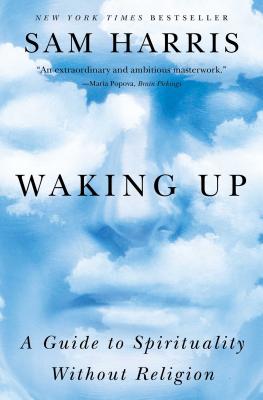 A Guide to Spirituality Without Religion

For the millions of Americans who want spirituality without religion, Sam Harris’s latest New York Times bestseller is a guide to meditation as a rational practice informed by neuroscience and psychology.

From Sam Harris, neuroscientist and author of numerous New York Times bestselling books, Waking Up is for the twenty percent of Americans who follow no religion but who suspect that important truths can be found in the experiences of such figures as Jesus, the Buddha, Lao Tzu, Rumi, and the other saints and sages of history. Throughout this book, Harris argues that there is more to understanding reality than science and secular culture generally allow, and that how we pay attention to the present moment largely determines the quality of our lives.

Waking Up is part memoir and part exploration of the scientific underpinnings of spirituality. No other book marries contemplative wisdom and modern science in this way, and no author other than Sam Harris—a scientist, philosopher, and famous skeptic—could write it.

Praise For Waking Up: A Guide to Spirituality Without Religion…

“Harris’s book . . . caught my eye because it’s so entirely of this moment, so keenly in touch with the growing number of Americans who are willing to say that they do not find the succor they crave, or a truth that makes sense to them, in organized religion.” (Frank Bruni, columnist, New York Times)

“The fact is that Waking Up lends a different picture of Harris (at least to me): an intelligent and sensitive person who is willing to undergo the discomfort involved in proposing alternatives to the religions he’s spent years degrading. His new book, whether discussing the poverty of spiritual language, the neurophysiology of consciousness, psychedelic experience, or the quandaries of the self, at the very least acknowledges the potency and importance of the religious impulse—though Harris might name it differently—that fundamental and common instinct to seek not just an answer to life, but a way to live that answer.” (Trevor Quirk, The New Republic)

“Uber-atheist Sam Harris is getting all spiritual. In his new book, Waking Up: A Guide to Spirituality Without Religion, the usually outspoken critic of religion describes how spirituality can and must be divorced from religion if the human mind is to reach its full potential. . . . But there is plenty in Waking Up that will delight Harris’ most militant atheist readers.” (Religion News Service)

“The great value and novelty of this book is that Harris, in a simple but rigorous style, takes the middle way between these pseudoscientific and pseudo-spiritual assertions . . . [leading] to a profoundly more salubrious life.” (Publishers Weekly)

“Don’t read Waking Up . . . if you want to be told that heaven is real. Do read it if you want to explore the nature of consciousness, to learn how just trying to be mindful can free you from anxiety and self-blame.” (MORE Magazine)

“A seeker’s memoir, a scientific and philosophical exploration of the self, and a how-to guide for transcendence, Waking Up explores the nature of consciousness, explains how to meditate, tells you the best drugs to take, and warns you about lecherous gurus. It will shake up your most fundamental beliefs about everyday experience, and it just might change your life.”
— Paul Bloom, Professor of Psychology and Cognitive Science, Yale University and author of "Just Babies: The Origins of Good and Evil"

“Waking Up is a rigorous, kind, clear, and witty book that will point you toward the selflessness that is our original nature.”
— Stephen Mitchell

“Sam Harris points out the rational methodology for exploring the nature of consciousness and for experiencing a transformative understanding of possibilities. Waking Up really does help us wake up.”
— Joseph Goldstein, author of "Mindfulness: A Practical Guide to Awakening" and "One Dharma"

“As a neuroscientist, Sam Harris shows how our egos are illusions, diffuse products of brain activity, and as a long-term practitioner of meditation, he shows how abandoning this illusion can wake us up to a richer life, more connected to everything around us.”
— Jerry Coyne, Professor of Biology at the University of Chicago and author of "Why Evolution is True"

"Sam Harris ranks as my favorite skeptic, bar none. In Waking Up he gives us a clear-headed, no-holds-barred look at the spiritual supermarket, calling out what amounts to junk food and showing us where real nutrition can be found. Anyone who realizes the value of a spiritual life will find much to savor here – and those who see no value in it will find much to reflect on."
— Daniel Goleman, author Emotional Intelligence and Focus

"Sam Harris has written a beautifully rational book about spiritually, consciousness and transcendence. He is the high priest of spirituality without religion. I recommend this book regardless of your belief system. As befits a book called Waking Up, it’s an eye opener."
— A.J. Jacobs, bestselling author of The Year of Living Biblically

Praise for Free Will:

“A nimble book, amiably and conversationally jumping from point to point. The book’s length is one of its charms: He never belabors any one topic or idea, sticking around exactly as long as he needs to in order to lay out his argument (and tackle the rebuttals that it will inevitably provoke) and not a page longer.” —Washington Post

“A brief and forceful broadside at the conundrum that has nagged at every major thinker from Plato to Slavoj Zizek. Self-avowedly secular, [Harris is] addressing the need for individual growth and social betterment, and [is] doing so with compelling argument and style.” —Los Angeles Times

“Harris skewers the concept of free will — that mainstay of law, policy and politics — in fewer than 100 pages.” —Nature

"Brilliant and witty—and never less than incisive—Free Will shows that Sam Harris can say more in 13,000 words than most people do in 100,000." —Oliver Sacks

Praise for The Moral Landscape:

“The most compelling strand in The Moral Landscape is its unspooling diatribe against relativism.” —New York Times

“This is an inspiring book, holding out as it does the possibility of a rational understanding of how to construct the good life with the aid of science, free from the accretions of religious superstition and cultural coercion.” —Financial Times

“Harris’s is a first-principle argument, backed by copious empirical evidence woven through a tightly reasoned narrative… Harris’s program of a science-based morality is a courageous one that I wholeheartedly endorse.” —Scientific American

“Sam Harris breathes intellectual fire into an ancient debate. Reading this thrilling, audacious book, you feel the ground shifting beneath your feet. Reason has never had a more passionate advocate.”—Ian McEwan

“I was one of those who had unthinkingly bought into the hectoring myth that science can say nothing about morals. To my surprise, The Moral Landscape has changed all that for me. It should change it for philosophers too. Philosophers of mind have already discovered that they can't duck the study of neuroscience, and the best of them have raised their game as a result. Sam Harris shows that the same should be true of moral philosophers, and it will turn their world exhilaratingly upside down. As for religion, and the preposterous idea that we need God to be good, nobody wields a sharper bayonet than Sam Harris.”—Richard Dawkins

“Reading Sam Harris is like drinking water from a cool stream on a hot day. He has the rare ability to frame arguments that are not only stimulating, they are downright nourishing… His discussions will provoke secular liberals and religious conservatives alike, who jointly argue from different perspectives that there always will be an unbridgeable chasm between merely knowing what is and discerning what should be. As was the case with Harris’ previous books, readers are bound to come away with previously firm convictions about the world challenged, and a vital new awareness about the nature and value of science and reason in our lives.” —Lawrence M. Krauss, Foundation Professor and Director of the ASU Origins Project at Arizona State University, author of The Physics of Star Trek, and, Quantum Man: Richard Feynman’s Life in Science

“A lively, provocative, and timely new look at one of the deepest problems in the world of ideas. Harris makes a powerful case for a morality that is based on human flourishing and thoroughly enmeshed with science and rationality. It is a tremendously appealing vision, and one that no thinking person can afford to ignore.” —Steven Pinker, Harvard College Professor of Psychology, Harvard University, and author of How the Mind Works and The Blank Slate

“Expanding upon concepts posited in the End of Faith and Free Will, neuroscientist Harris draws from personal contemplative practice and a growing body of scientific research to argue that the self, the feeling that there is an “I” residing in one’s head, is both an illusion and the primary cause of human suffering…. The great value and novelty of this book is that Harris, in a simple but rigorous style, takes the middle way between… pseudoscientific and pseudospiritual assertions, cogently maintaining that while such contemplative insights provide no evidence for metaphysical claims, they are available, and seeing them for ourselves leads to a profoundly more salubrious life.”
— Publishers Weekly

Sam Harris is the author of the bestselling books The End of Faith, Letter to a Christian Nation, The Moral Landscape, Free Will, and Lying. The End of Faith won the 2005 PEN Award for Nonfiction. His writing has been published in over fifteen languages. Dr. Harris is cofounder and CEO of Project Reason, a nonprofit foundation devoted to spreading scientific knowledge and secular values in society. He received a degree in philosophy from Stanford University and a PhD in neuroscience from UCLA. Please visit his website at SamHarris.org.
Loading...
or support indie stores by buying on