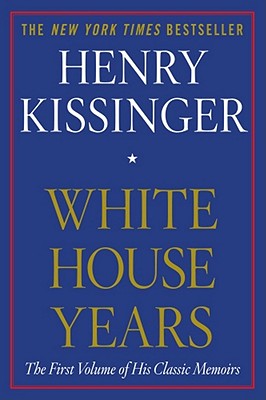 Kissinger’s invaluable and lasting contribution to the history of this crucial time. One of the most important books to come out of the Nixon Administration, the New York Times bestselling White House Years covers Henry Kissinger’s first four years (1969–1973) as Assistant to the President for National Security Affairs.

Among the momentous events recounted in this first volume of Kissinger’s timeless memoirs are his secret negotiations with the North Vietnamese in Paris to end the Vietnam War, the Jordan crisis of 1970, the India-Pakistan war of 1971, his back-channel and face-to-face negotiations with Soviet leaders to limit the nuclear arms race, his secret journey to China, and the historic summit meetings in Moscow and Beijing in 1972. He covers major controversies of the period, including events in Laos and Cambodia, his “peace is at hand” press conference and the breakdown of talks with the North Vietnamese that led to the Christmas bombing in 1972. Throughout, Kissinger presents candid portraits of world leaders, including Richard Nixon, Anwar Sadat, Golda Meir, Jordan’s King Hussein, Leonid Brezhnev, Chairman Mao and Chou En-lai, Willy Brandt, Charles de Gaulle, and many others.

White House Years is Henry Kissinger’s invaluable and lasting contribution to the history of this crucial time.

Henry Kissinger was the fifty-sixth Secretary of State. Born in Germany, Dr. Kissinger came to the United States in 1938 and was naturalized a US citizen in 1943. He served in the US Army and attended Harvard University, where he later became a member of the faculty. Among the awards he has received are the Nobel Peace Prize, the Presidential Medal of Freedom, and the Medal of Liberty. Dr. Kissinger is currently Chairman of Kissinger Associates, Inc., an international consulting firm.
Loading...
or support indie stores by buying on