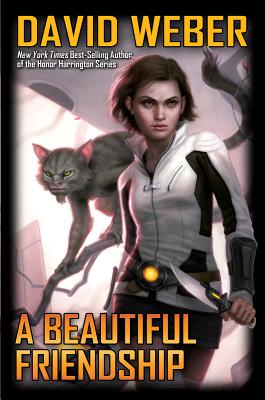 New York Times, USA Today, Wall Street Journal and international bestselling phenomenon David Weber delivers the first entry in an original young adult science fiction adventure series, the Star Kingdom saga Young teen Stephanie Harrington forms a telepathic bond with an intelligent alien treecat on a pioneer planet--and must fight for the freedom of her new friend and his species against highly-placed enemies determined to claim the world for humans only. Stephanie Harrington always expected to be a forest ranger on her homeworld of Meyerdahl . . . until her parents relocated to the frontier planet of Sphinx in the far distant Star Kingdom of Manticore. It should have been the perfect new home --- a virgin wilderness full of new species of every sort, just waiting to be discovered. But Sphinx is a far more dangerous place than ultra-civilized Meyerdahl, and Stephanie's explorations come to a sudden halt when her parents lay down the law: no trips into the bush without adult supervision Yet Stephanie is a young woman determined to make discoveries, and the biggest one of all awaits her: an intelligent alien species. The forest-dwelling treecats are small, cute, smart, and have a pronounced taste for celery. And they are also very, very deadly when they or their friends are threatened . . . as Stephanie discovers when she comes face-to-face with Sphinx's most lethal predator after a hang-gliding accident. But her discoveries are only beginning, for the treecats are also telepathic and able to bond with certain humans, and Stephanie's find --- and her first-of-its kind bond with the treecat Climbs Quickly --- land both of them in a fresh torrent of danger. Galactic-sized wealth is at stake, and Stephanie and the treecats are squarely in the path of highly-placed enemies determined to make sure the planet Sphinx remains entirely in human hands, even if that means the extermination of another thinking species. Unfortunately for those enemies, the treecats have saved Stephanie Harrington's life. She owes them . . . and Stephanie is a young woman who stands by her friends. Which means things are about to get very interesting on Sphinx. About A Beautiful Friendship:
"It's rare to find teen science fiction that strays beyond popular dystopian fare. The environmental messages, human-animal friendship, humor, action, and inventive technology will make this series starter an easy hit. . . ."--Booklist

With over seven million copies of his books in print and seventeen titles on the New York Times bestseller list, David Weber is the science fiction publishing phenomenon of the new millennium. In the hugely-popular Honor Harrington series, the spirit of C.S. Forester's Horatio Hornblower and Patrick O'Brian's Master and Commander lives on--into the galactic future. Books in the Honor Harrington and Honoverse series have appeared on fourteen best seller lists, including those of The Wall Street Journal, The New York Times, and USA Today. While Weber is best known for his spirited, modern-minded space operas, he is also the creator of the Oath of Swords fantasy series and the Dahak saga, a science fiction and fantasy hybrid. Weber is has also engaged in a steady stream of bestselling collaborations including his Starfire Series with Steve White, which produced the New York Times bestseller The Shiva Option among others. Weber's collaboration with alternate history master Eric Flint led to the bestselling 1634: The Baltic War, and his planetary adventure novels with military science fiction ace and multiple national best-seller John Ringo includes the blockbusters March to the Stars and We Few. Finally, Weber's teaming with Linda Evans produced the bestselling Multiverse series. David Weber makes his home in South Carolina with his wife and children.
or support indie stores by buying on
Copyright © 2020 American Booksellers Association