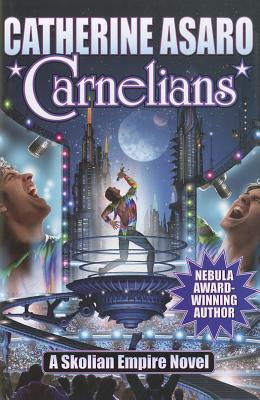 Carnelians (Saga of the Skolian Empire)

Multiple Nebula-award-winning Catherine Asaro continues her brilliant and intricate Skolian space opera opus. Two galactic emperors attempt to end a multi-generation war of the stars without both getting assassinated in the process. The leaders of the Eubian empire and Skolian Imperialate have survived political intrigue, military coups and murder attempts as they worked to forge a peace treaty between their two empires. Now comes the hard part--making the treaty a reality. Assassins are poised on both sides. Their mission: eliminate the leaders for the "crime" of striving to end half a millennia of hatred between empires. And as the main players in the peace process attempt to navigate the Byzantine convolutions surrounding the negotiations, an explosive pop anthem, Carnelians Finale, sweeps across three civilizations, its message inflaming passions. The violence escalates and militaries on both sides are called forth. The hope: to keep both empires alive long enough so that their rulers might somehow achieve peace at last.

"Entertaining mix of hard SF and romance."--Publishers Weekly "Asaro's Skolian saga is now nearly as long and in many ways as compelling as Dune, if not more so, featuring a multitude of stronger female characters."--Booklist "Rapid pacing and gripping suspense."--Publisher's Weekly

Two-time Nebula-award winner Catherine Asaro has an M.A. in physics and a Ph.D. in chemical physics from Harvard. A former ballet and jazz dancer, she founded the Mainly Jazz Dance program at Harvard and now teaches at the Caryl Maxwell Classical Ballet. She's the creator of the popular Skolian Saga science fiction series with The Ruby Dice, Diamond Star and Carnelians as the latest entries. Her other books include near-future technothrillers Alpha and Sunrise Alley. Asaro lives in Maryland with her husband and daughter.
Loading...
or
Not Currently Available for Direct Purchase