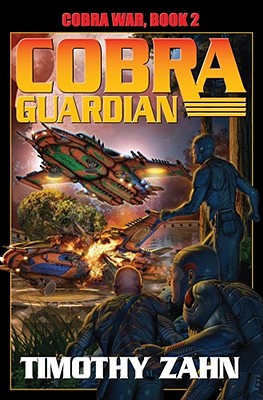 Cobras warriors, genetically enhanced and implanted with an arsenal of covert weaponry, are the most dangerous guerilla fighters humanity has ever produced. Now one young Cobra must forge a new political order as a devastating alien enemy strikes—an enemy more deadly than any humanity has ever faced. Earth has won a previous war with the deadly Troft and grown soft, but now the aliens are back! Jasmine Moreau Broom, descendant of a now-legendary Cobra family, must rally the Cobras to war after a devastating attack on every planet with Cobra on it nearly succeeds in wiping them out entirely.

But the Troft are not monolithic, and some do not want to take on the humans again in a war they lost before.  But what humanity’s erstwhile allies need is a victory against the belligerents to convince them to oppose the invasion.The key to such a victory lies with Jasmine’s quest to uncover a secret that might turn the tide while searching on a world that is under full-on alien attack.

“Zahn keeps the story moving at a breakneck pace, maintaining excitement [in Dragon and Thief].”—Publishers Weekly